The first type of test was the Qualitative Examination test, which was done if the ingredients of the powder were not known (e.g. some powders did not have sulfur, others may have sodium nitrate instead of potassium nitrate, still others may have charcoal made of wood, wood pulp, bark, straw etc.).

Recall a few months ago, we had stated that black powder is a mixture and not a compound at room temperature. It only forms various chemical compounds when it starts to burn. Therefore, since it is a mixture, it retains properties of its component parts.

Therefore, to determine the kind of nitrate contained in the powder, a small quantity of powder would be put in a filter and then hot water poured over it, which dissolves the nitrate salt. The filtered liquid was then chemically analyzed to determine the type of nitrate. Next, to determine if the powder contains sulfur or not, a small quantity was placed in a beaker and carbon disulfide was poured on top and allowed to stand for a little while. The solution was then poured out and evaporated. If any sulfur was present in the powder sample, it would crystallize out. To determine the type of charcoal used, they would first remove the sulfur from the sample using the carbon disulfide solution, then they would filter it and then wash with hot water to extract the saltpeter out, then they would dry out the remaining residue and examine it under a microscope, which would show whether the carbon was made from charcoal, wood pulp, wood bark, straw etc.

After the saltpeter had been removed from the sample of powder, the next was to determine the amount of sulfur in the remaining sample. This could be done either directly, or by converting the sulfur into sulfuric acid. The direct method was due to Berzilius: The sample of powder after the saltpeter was extracted, was dried and weighed and then transferred into one of the bulbs of a double bulbed tube. A current of dry hydrogen was passed over the mixture while it was gradually heated. This heat would cause the sulfur to vaporize and the sulfur fumes would be carried along with the current of hydrogen into the second bulb, where it would cool down and crystallize in the second bulb. The decrease in weight in the first bulb and the increase in weight in the second bulb could be measured and this would show the amount of sulfur in the sample. Another technique was to dissolve the sulfur in a carbon disulfide solution and then evaporate it to recover the sulfur crystals, which could then be weighed to determine the percentage of sulfur in the sample.

After the saltpeter and sulfur have been removed, the remainder was dried and weighed to determine the amount of carbon in the sample.

It is also possible to determine all the components of black powder simultaneously, using special apparatus, such as that invented by Linck in the 19th century. 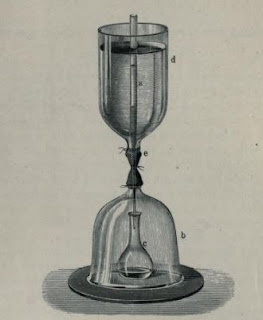 
This involves using various pieces of equipment to precisely extract the components of the powder, using carbon disulfide, hot water, barium chloride, lead acetate etc. to determine the exact quantities of the various ingredients in the sample.