In our last post, we learned that an Austrian officer, Wilhelm Freiherr Lenk von Wolfsberg, had come up with a method to produce gun cotton efficiently. We will study more about his exact process in today's post: 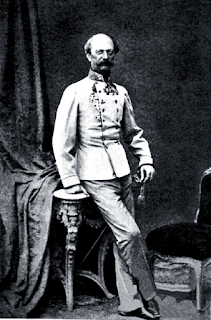 Baron von Lenk in 1866. Click on the image to enlarge. Public domain image.

The Von Lenk process involves the following general guidelines:
The process started by spinning the cotton into hanks of about 85 grams (about 3 oz.) each, suspended on hooks in a hot solution of potash. An under-heated iron boiler was used for this purpose, the water in the boiler containing sufficient potash to give it a specific gravity of about 1.022. The cotton was immersed in the boiling potash solution for about 2 to 3 minutes, according to the amount of grease contained in the cotton strands. The potash solution acts as a soap and removes the grease. Then the cotton hanks were put in a centrifugal machine and spun around at high speeds to drive out some of the potash solution (the same idea is used in modern washing machines as well). Then the cotton hanks were put in perforated zinc baskets and swung to-and-fro in pure water to remove any remaining traces of soap, after which they were wrung out again and allowed to completely dry out. This completed the stage 1 of the process, cleaning out the cotton and drying it.

The acid mixture was prepared by taking strong nitric acid of specific gravity 1.48 to 1.49 (at 17.5° C or 63.5° F) and strong sulfuric acid of 1.835 specific gravity and streaming them from two taps into an earthenware vessel. The proportion was usually 1 part of nitric acid to three parts of sulfuric acid. The process of mixing the two acids produces heat, so the mixture was allowed to cool in the earthenware jars and stored until ready for use.

The nitration process was done in cast-iron dipping pans divided into three compartments, with a grating fitted over the middle one. Two hanks of cotton at a time were put into 300 times their weight of acid mixture in the first two compartments of a dipping pan. The hanks were turned over and squeezed with spatulas until the acid had completely penetrated through the cotton hanks. Next, they were transferred to the grating and squeezed again to free out most of the excess acid, the cotton being allowed to retain about 9.5 parts of acid. When about 2 kg. (4.4 lbs.) of cotton had been treated this way, the acid mixture was emptied out and fresh acid was put into the dipping pan. When six hanks of cotton had been nitrated, they were put into another earthenware pot standing in the third compartment of the dipping pan. A weighted disk was put into the pot to make sure that the cotton was completely submerged in the acid and then the pot was closed with a lid and allowed to stand for between 24 to 48 hours in a special temperature-controlled room, where the temperature was not allowed to fall below 5° C (41° F) or go above 25° C (77° F). In order to maintain the temperature within these limits (remember that air-conditioning technology wasn't really well developed yet), the room had to be heated during winter and the exterior of the pots was cooled by running water in the summer. During the first two to six hours, the pots had to be watched carefully and the heating was prevented either by adding some fresh acid or passing cold water around the pots.

After the nitration was finished, the crude gun-cotton was then put into centrifugal machines and spun around again to remove some of the excess acid. Then they were washed with a large quantity of water in copper drums and then finally treated in running water in special washing boxes for six weeks. The gun-cotton was then wrung out  again in a centrifugal machine, treated with a boiling potash solution, then again through the centrifugal machine, washed with pure water, through the centrifugal machine once more and then dried. After this, it was dipped into a solution of sodium silicate of 1.072 specific gravity, then a spin cycle through a centrifugal machine again and then finally exposed to the air for three days. During this time, the sodium silicate was decomposed by the action of carbonic acid in the air and silica (or an insoluble silicate) would precipitate on the fibers of the gun-cotton. After three days, the product was again washed in pure water, passed through another spin cycle in the centrifugal machine and then dried in open air, or in a drying house, at a temperature not exceeding 35° C (95° F) and making sure to avoid direct exposure to the sun's rays. While all of this washing and wringing the cotton in the centrifugal machines may seem excessive, it was necessary to do this to ensure that even minute traces of acid were removed from the treated gun-cotton, in order to ensure its stability.

Unlike the processes of previous inventors such as Schonbein, Otto etc., which could only be used to manufacture small quantities at a time, Von Lenk's process could be scaled up to produce large quantities.

Baron Von Lenk patented his process and was invited to give lectures in France and England detailing his methods. While in France, he was personally awarded the Commander's Cross of the Legion of Honor from Emperor Napolean III and was also given a box studded with diamonds for his discoveries.

In Austria, another army officer, Ritter von Lorenz (Joseph Lorenz) was working on the design of a rifle which was first approved in 1854 and subsequently updated in the following years. The version that was manufactured in 1862 used a steel barrel instead of a cast-iron one, in order to use gun-cotton cartridges. The gun-cotton cartridges and the M1862 Lorenz rifle model came to the attention of Dr. Theodore Canisius, the US consul to Austria at that time. Dr. Canisius saw the advantages of gun-cotton over black powder and began to send back regular reports to the State Department about various Austrian experiments with gun-cotton propellants. In August 1863, Dr. Canisius returned to the US with an M1862 Lorenz rifle and some Austrian ammunition samples, and arranged meetings with several key officials (including then Secretary of State, William Seward, Secretary of War, Edwin Stanton and some military officers) to try and convince them to adopt this new technology. While the military were not entirely convinced, the Austrian military had decided to switch to gun-cotton entirely and therefore, a lot of their Lorenz rifles designed for black powder were now available for sale. As a result of this, a large number of Lorenz rifles were purchased by both the Union and Confederate sides during the US Civil war, with the Union purchasing over 225000 rifles and the Confederates buying 100,000 rifles. In fact, the Lorenz rifle was the third most used rifle during the Civil war.

However, Von Lenk's process was abandoned by Austria around the end of 1865, due to explosions in two factories and a fear about the stability of gun-cotton. Nevertheless, scientists in other countries were hard at work trying to improve on his processes. The next breakthroughs were by a Prussian artillery officer, Johann Edward Schultze, a French scientist, Paul Vielle and a British scientist, Sir Frederick Abel, and we will study about their discoveries in the next few posts.