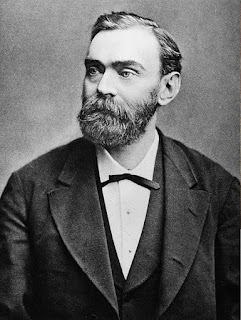 The Swedish inventor we are talking about is Alfred Nobel, who was a prolific inventor and was well known for inventing dynamite (and later, founding the Nobel prizes). Alfred Nobel's father, Immanuel Nobel, owned an armaments factory and Alfred and two of his brothers, Ludvig and Emil Nobel, were all interested in manufacturing better armaments and explosives. Alfred Nobel devoted a lot of his time to studying how to manufacture explosive substances safely and invented (among other things) a detonator, the blasting cap, dynamite, gelignite etc. These inventions (along with shares in the largest oil refinery in Russia, which was founded by his brothers, Ludvig and Robert) made him a very rich man and in 1873, he bought a large mansion on Avenue Malakoff in Paris and moved there. Despite his riches, he did not forget his interest in chemistry and still continued doing research in his laboratory.

It is not known exactly how he discovered how to make ballistite, but from his notes, it appears that he had been working on and off to make a smokeless powder since about 1879. He experimented over many months with various acids to make many explosive prototypes, which he tested at a blasting range outside Paris and then worked with assistants to perfect the manufacturing process. He didn't keep very many detailed notes mainly because of the need to protect trade secrets from competitors.

In 1887, a few months after Poudre B was accepted by the French government, Alfred Nobel submitted a patent application for his own smokeless powder, which he called "ballistite". According to his patent application, this was a combination of equal parts of nitroglycerin and nitrocellulose "of the well known soluble kind", with about 10% camphor. The exact wording on the patent application would come back to haunt him, as we will see in our next post. The purpose of the camphor was to react with any acidic products formed by the decomposition of the other two explosive substances. The camphor helped stabilize the other two substances from further decomposition and prevented explosions. In his 1887 patent application, Nobel wrote, "Celluloid, as a rule, contains nitrated cotton to approximately two-thirds of its weight, but owing to the camphor content and substance's compact consistency, celluloid's combustion, even if fine-grained, is far too slow to make it suitable as a propellant for projectiles. By substituting nitroglycerin, wholly or in part, for camphor, it is possible to produce a kind of celluloid with sufficient consistency to be formed into grains and which, on being loaded into firearms, burns with a subdued rate of combustion."

Like the Poudre B that we studied in the previous post, ballistite is also a substance that burns with much more force than black powder, but produces very little smoke and residue as well. Like Poudre B, it is also a plastic that can be shaped like dough and cut into precisely shaped and sized grains to fit the needs of everything from the smallest pistol to the biggest cannons.

So when Alfred Nobel triumphantly presented his latest invention to the French military in 1887, he was surprised to be rebuffed. It turns out that the French had just settled on using Poudre B a few months earlier in 1886 and Paul Vieille's political connections ensured that Poudre B would be used by the French military even though ballistite was a superior product. Nobel angrily wrote that "for all governments, a weak powder with strong influence is obviously better than a strong powder without this essential complement." Nevertheless, he went about marketing his invention to other countries and on August 1st, 1889, he obtained a contract from the Italian government and opened a new factory in Turin where he manufactured about 300 tons for the Italians. The next year, he licensed his patent to the Italian government for a large sum of money, so that they could manufacture it by themselves. The Italian army, in turn, replaced their old black powder rifles and adopted a new M1890 Vetterli rifle which used ballistite cartridges. 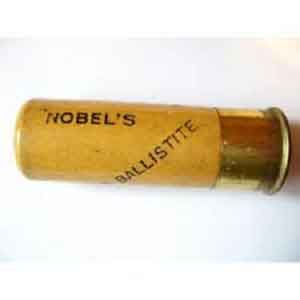 During that period of time, France and Italy were competing with each other, to become great powers in Europe. Naturally, the news that a person living in Paris and helping their enemy with manufacturing superior cartridges did not sit very well with the French public and military. The French newspapers launched a series of articles attacking Nobel's character, accusing him of treason (despite him offering ballistite to the French first and living in France for 17 years) and claiming that he had spied on Vieille and stolen his recipe for ballistite from the laboratories of the French Administration des Poudres et Salpetres. The police conducted a search on his laboratory and shut it down, his testing range permit was revoked and he was prohibited from manufacturing ballistite in France. Therefore, in 1891, Nobel packed up his possessions from his mansion in Paris, along with any laboratory equipment that hadn't been seized, and moved everything to San Remo in Italy, where he bought a large house that he named Villa Nobel. He also built a laboratory close to his new house and continued experimenting there for the rest of his life.

It must be noted that the production process of ballistite involved making flexible sheets, which were cut into flakes in cutting machines, or in pastry cutters, or squirted through gratings to form threads. It was a curious fact that many machines that were originally used in Italy to make bread, pastries, pasta, spaghetti and macaroni, were now employed in the manufacture of smokeless powders!

Italy wasn't the only country that Alfred Nobel was marketing his invention to. In the next post, we will study how he accidentally helped Britain to make their own smokeless powder.