In our last post, we studied how the team of Serrau and Vieille had made improvements in the process of measuring chamber pressures. In fact, Vieille invented a modification to the crusher gauge that enabled him to record the explosive strength over time, rather than just the maximum explosive strength. He also studied the effect of other parameters such as grain sizes and shapes and how they affected the speed of the explosion and the pressure curves generated over time. This enabled him to prove that the theory originally suggested in 1839 by General Guillaume Piobert, was indeed valid fact, and that combustion does take place in parallel layers (Piobert's law) 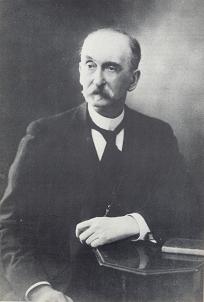 In the case of classic black powder, the powders are made of a mixture of charcoal, potassium nitrate (saltpeter) and sulfur and made of individual grains. They can be made to varying densities by refining and compressing them, which we studied in several previous posts. However, there are still spaces in between the grains and these interstices cannot be completely got rid of in conventional black powder. Therefore, no black powder really burns according to Piobert's law of parallel layers -- for this to happen, the black powder needs to be a homogeneous mixture without these spaces between the grains.

However, Vieille didn't just study black powder, he also extended his study newer explosives (including gun cotton) as well. Due to his studies, he now understood why gun cotton's fibrous structure caused it to burn much more quickly in a barrel than black powder and why it produced much more force. He understood that if he could somehow reduce the combustion rate of gun cotton, then it could be used as an excellent propellant for firearms as well, and to do this, he would need to change the structure of the gun cotton fibers, so that he could enable it to burn in "parallel layers". His idea was to convert the gun cotton into a "powder", not like black powder which has gaps between the grains, but more like a homogeneous material whose geometry could be modified by the manufacturer to burn at a precise rate in layers. His method was to dissolve the gun cotton in a mixture of alcohol and ether, stabilize it with amyl alcohol and form a colloidal paste. This colloidal paste could then be passed through heavy rollers to make thin sheets of precise thickness, extruded into rods, molded into plates etc. and then dried and cut into flakes of precise shapes suitable for the ballistic requirements of any particular firearm or artillery piece. All this development took place between 1882 and 1884 and the first practical results came out in 1884. 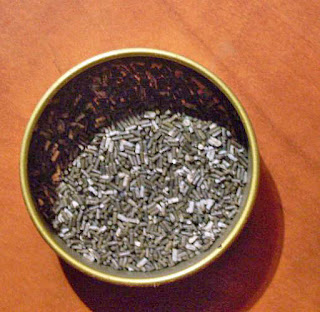 A sample of Poudre B. Click on the image to enlarge.
Image released under the Creative Commons Attribution-Share Alike 3.0 Unported license by snipersnoop

The first version of this new propellant was called "Poudre V". The word "Poudre" means "powder" in French and the letter "V" at the end stood for the name of its inventor, Paul Vieille. However, the French military were concerned that the Germans might find out details about this new invention and therefore, they arbitrarily changed its name to "Poudre B" so that the inventor's name would no longer be in it. Some claim that the name stood for "Poudre Blanche" (i.e. white powder), to distinguish it from black powder (note that Poudre B is not white colored either, it is actually a dark green and gray color), but the real reason for renaming it was to confuse German spies. The French military quickly adopted this powder and they also developed a new rifle for this, the 8 mm. Lebel rifle, in 1886. This was the first military rifle to use smokeless ammunition.

The Lebel rifle was a game-changer on the battlefield. First, it had longer range and a flatter trajectory than other rifles. Since the ammunition produces much less smoke, a soldier could stay hidden from the enemy, but locate them by observing the smoke from their black powder rifles. As the new propellant was three times more powerful than black powder, the cartridges weighed less for the same performance, which meant the soldier could carry more of them. The Lebel could also fire at the faster rate of 43 rounds a minute, compared to 26 rounds for the black powder M84 rifle of the German army. This is one reason why Otto von Bismarck opposed invading France in the winter of 1888 when his war minister Alfred von Waldersee wanted to go to war.

Other foreign powers learned that the French possessed a new propellant by 1886 after the Lebel rifle was accepted into military service. German spies were able to obtain a sample, but could not identify its components or manufacturing process. In 1890, the British managed to obtain some small tablets of Poudre B and picric acid and identified the compounds that form the basis of it. Quickly, the knowledge of its composition spread to other countries as well and they began to manufacture their own smokeless powders as well.

It must be mentioned that Poudre B still had some stability issues, especially when stored for long periods of time, due to the improper removal of acid during their manufacturing process. This caused two French warships, the Iena and the Liberte, to blow up in 1907 and 1911. Meanwhile, the process of manufacturing Poudre B had made improvements and newer versions (such as Poudre BF and Poudre BN3F) were invented by the early 1900s, which were much safer than Poudre B. In fact, the French used a variant called "Poudre BPF1" until the 1960s or so.