One of the more exotic firing mechanisms around is the electrical firing mechanism. Mr. W.W. Greener, in his book, The Gun and Its Development, mentions an electric gun that was developed around the 1860s or so by "a French Baron living in Prague".

In this gun (which was a muzzle-loading weapon), a large bichromate battery A is stored in the butt of the gun. To remove the battery, one must remove the plug B and the heel-plate C at the end of the butt to access the battery. An induction coil D is connected to A to step up the voltage. Because the coil vibrates a lot during operation, a small magnet F is placed inside the coil to minimize the vibrations. When the user pulls trigger K, this causes the nut J to partially turn and withdraws the rod H to the guide L and comes to rest at stop O. The circuit at OPR is now complete and generates a spark which fires the priming charge, which in turn fires the main charge, which fires the weapon.
Another weapon invented by Henri Pieper of Liege, Belgium, also had an electrical firing mechanism. This weapon was a breechloader and was invented around 1883.

The user carried the batteries in the pocket of his coat. A special pad was fastened to the shoulder of the jacket or shooting coat of the user and this pad was connected to the batteries in the user's coat pocket. When the user placed the gun on his shoulder, a metal conductor on the heel of the rifle butt would contact the special pad and allow electricity to flow through the weapon. The cartridges of this weapon were also special as shown below: 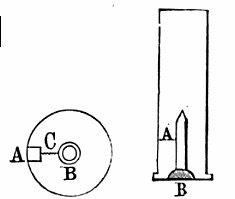 Each cartridge was made of metal. To one side was a metal stud A, another metal contact point B, and a connection C made of thin wire, which connected A and B. Upon pulling the trigger of the gun, electricity flows from A to B via the wire C which sparks up and triggers the primer and thereby ignites the gunpowder. This weapon was claimed to have a battery life of two weeks and could fire about a 1000 shots before needing to recharge the batteries.
These weapons never really caught on because they could not provide a mechanism that was more reliable than a centerfire cartridge. Making the cartridges was also relatively more complicated. However, this wasn't the end of line for an electric firing mechanism.
With the advent of caseless cartridge technology, at least two different companies, Voere of Austria and Metal Storm of Australia, manufacture weapons that use electronic ignition systems. Another weapon is the Remington EtronX that uses centerfire cartridges with an electronic ignition system. This weapon has a couple of 9 volt batteries in the butt, that supply the current to fire the weapon.
Electrical systems haven't caught on much yet because of a number of reliability issues, e.g. what happens if the weapon is accidentally dropped into water. However, it has the advantage of reacting faster than mechanical systems, so some research does still continue in this area of technology.
Posted by The Editor at 11:14 PM