In our last post, we studied the principle of rifling with the expanding bullet. Now, we will study another system of rifling that has also stayed with us to this present day. We start our history with the Enfield 1853 rifle, which worked with an expanding bullet (the Minie ball concept) that we talked about in the previous post. While the original design was done by Enfield, the actual manufacturing of weapons wasn't always done by them, since they didn't have the facilities to produce the weapons at the rate that the British military needed them. Hence, several London based firearm manufacturers were subcontracted to manufacture the weapon to the Enfield design's specifications and the job of checking that each contractor manufactured to the same specifications fell to the Royal Armory at the Tower of London.

In 1852, the official Master of Ordinance and Arms, whose job it was to ensure that standards of weapons manufacture were met, was Sir Henry Hardinge, First Viscount Hardinge of Lahore. Indian readers of this blog might recognized the name because this is the same Hardinge who had earlier served a term as Governor General of the East India company, founded Roorkee University (now IIT Roorkee) and under whose term of rule, the first Anglo-Sikh war had taken place. He had returned to England after his term in India and had been promoted to the post of Master of Ordinance and Arms. Viscount Hardinge was engaged in the study of the comparative merits of the rifles manufactured by Government owned factories (such as Enfield Rifle works) and those made by private manufacturers. He was most distressed to find that there were such wide standards used in manufacturing that no two rifles shot alike and many parts could not be interchanged, even if the rifles were the same model.

In order to solve the problem, he recruited Mr. Joseph Whitworth (later Sir Whitworth), to improve the precision of manufacturing tools. Mr. Whitworth was arguably the foremost mechanical engineer of that time period and was already famous for manufacturing precision tools (such as the Whitworth lathe, shapers, planers, drills etc.) and establishing a standard for screw threads (The British Standard Whitworth (BSW) thread standard, which is still used to this day. E.g. look at the base of any camera where you attach a stand and that's a whitworth screw thread). After some research, Mr. Whitworth came to the conclusion that the fault was really in the design of the rifle rather than the production techniques, and was commissioned by the British Government to improve the rifle design altogether. He was built an extensive test facility for this purpose, which became operational in 1855. Meanwhile, Mr. Whitworth had already built a cannon using a polygonal bore in 1854 and decided to adopt this same principle to firearms. He also worked to determine the best form of bullet.

At that point, the bullet that was being used by the Enfield Model 1853 rifle was cylindro-conoidal and on attempting to elongate the bullet, he discovered that it had a tendency to tumble over in flight. He determined that this was due to the slow spiral of the rifling (the Enfield had a 39 inch barrel with three threads, each making one turn in 78 inches) and tried out every combination from 1 turn in 5 inches to 1 turn in 78 inches to find the best possible combination. He eventually settled on a rifling of 1 turn in 20 inches, which he determined gave the bullet enough stability in flight to not tumble over, but also kept the forward velocity of the bullet high enough.

Whitworth was already known for inventing Engineer's Blue, which was useful for machining perfectly plane surfaces (i.e. flat surfaces), and several precision planers. Hence, he determined that instead of a round rifled barrel, he was going to manufacture one using several plane surfaces (i.e. flat surfaces). The reason for this was because he could machine flat surfaces much more precisely and thereby increase the tightness of fit of the bullet. The bullet could be made of harder lead material as it did not need to deform to engage the rifling. In the process, Whitworth elongated the bullet (at that point, Minie balls were still more round than tapered) and made it more like the modern bullets of today. He also discovered that with each variation of bore, the charge and size of the bullet had to be modified as well and determined that 0.450 inch diameter was the optimum for the amount of gunpowder and weight of lead that he was restricted to (the restriction was that the weight of gunpowder could not exceed 70 grains and the weight of the bullet could not exceed 530 grains)

First, we will look at the competing Enfield bullet and rifle bore:

The Enfield 1853 rifle is a muzzle-loading weapon that has a barrel that is circular in cross-section and is 39 inches long with 3 grooves in it. Each groove is cut so that it would make a complete turn every 78 inches, which means that each groove makes one 1/2 turn through the length of the 39-inch barrel. The bore of the Enfield is 0.577 inches and the length of the bullet is 1.8 times its diameter. The bullet is cylindro-conoidal in shape and has a wooden plug at the base. The bullet is wrapped in greased paper before being inserted into the barrel. Firing mechanism is a percussion lock and upon firing the weapon, the bullet expands and engages the three grooves of the rifling. In order for the expansion to happen properly, the lead is required to be very pure and soft.

Now we look at the new Whitworth design: 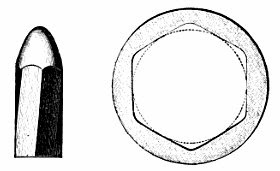 The Whitworth rifle is also a muzzle-loader with a percussion lock firing mechanism. Like the Enfield 1839, this model also has a 39 inch long barrel, but it has a smaller bore of 0.451 inches, since Whitworth's experiments proved that this was the best caliber for the gunpowder amount and bullet weight requirements. The rifling is much tighter, being one turn in 20 inches, which means the bullet makes almost 2 turns by the time it comes out of the barrel. The cross section of the barrel is hexagonal instead of circular and the smallest diameter is 0.451 inches and the widest diameter is 0.490 inches. The bullet itself is smaller in width and is also hexagonal shaped in cross-section. However, it is much longer than the Enfield bullet, with the length to width ratio being 3 : 1. The bullet can be dropped into the barrel much easier than the Enfield bullet. Since expansion of the bullet is not critical to engage the rifling, it is possible to use bullets made of harder materials, e.g. tin-lead alloys or hardened steel! An expanding bullet made of soft pure lead may also be used as well.

It was argued that the tighter rifling of the Whitworth rifle (1 in 20 inches) reduced the velocity of the bullet, but a test conducted in 1857 at Government School of Musketry at Hythe showed that the Whitworth rifle penetrated fifteen elm planks to the Enfield's six, with the same amount of gunpowder in each. A hardened bullet on the Whitworth penetrated 35 planks, whereas the Enfield, which could only shoot soft lead bullets, only managed to penetrate 12 planks. The rifles were also put to accuracy tests by taking ten shots each at targets at various ranges. The following table and diagram illustrate clearly the results that were obtained during the trial (figures reproduced from W.W. Greener's The Gun and its Development, Second Edition): 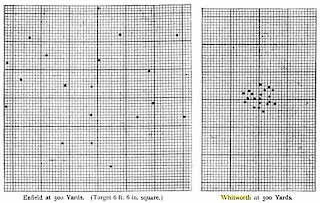 As you can see from the figures and the bullet holes above, the Whitworth rifle clearly outperformed the Enfield 1853, which was the premier rifle of its day. Until the Whitworth came out, the best recorded deviation from the center for any rifle at 500 yard ranges was 27 inches (2.24 feet). The Whitworth rifle at 500 yards had a mean deviation of only 4.5 inches! At 1400 yards range, the Enfield could not even hit the target square which was 14x14 feet in size.
The committee, while acknowledging the Whitworth's superiority in accuracy, also noted that the barrel tended to foul up easily due to the quality of black powder used in those days. They also expressed doubts about how the hexagonal bullets could be manufactured in bulk and had concerns about whether these rifles could be manufactured with equal mechanical perfection. At that time, the British tactics relied on mass-rapid fire and less on accuracy and the Whitworth rifle also cost 4 times more than the Enfield to manufacture. As a result, the Whitworth rifle was rejected by the British Government as non-suitable for their order of battle. There was a trial held in England in 1860 at the National Rifle Association, but since Whitworth was not a gunmaker of experience, his rifle had ignition problems due to faulty percussion-lock design. On the other hand, rival gunmakers learned from his methods and produced weapons of similar caliber, using the same rifling, but better firing mechanisms. The Henry rifle which won the competition had many of the features pioneered by the Whitworth rifle. One more problem with the Whitworth was that it was a muzzle-loader and hence shared the defects of all muzzle-loaders (i.e.) took longer to load than a breech-loader and the user had to stand up to reload the weapon.


However, this did not spell the doom of the Whitworth rifle. There were other people who were interested in accurate weapons -- quite a few Whitworth rifles were purchased by the Confederate Army of America and were used in the US Civil War with deadly accuracy. The Confederates were fighting against an Union force that was vastly larger and had better artillery. To counter the artillery of the Union army, the Confederates created a unit called the Whitworth Sharpshooters which was designed to harass the artillery batteries. In fact, this unit was the birth of the first dedicated modern sniper unit and the Whitworth is one of the original sniper rifles!

Traditional rifling is still used for many sharpshooter weapons, but polygonal rifling has the advantage of higher velocities, less wear and tear than conventional rifling and less lead and copper buildup in the barrel, which makes cleaning easier.


Due to the success of the polygonal bore, many manufacturers still manufacture weapons using this technique. While the polygonal bore idea fell out of fashion between 1890 and 1940, the Germans brought the concept back with the MG-42 machine gun in WW-II. The well-known Heckler and Koch G3 assault rifle also has polygonal rifling (from the G3A3 model upwards), as does their PSG-1/MSG90 sniper rifle. Polygonal rifling is also used on some handguns made by Glock, Heckler & Koch, Ceska Zbrojovka (CZ), Kahr arms, Desert Eagle and others.