In designs of weapons we've studied so far, one of the major problems as how to provide a tight seal for the bullet when it is fired. The solution for hundreds of years was to wrap the bullet in a greased cloth patch and ram it down the barrel. This worked reasonably well for smooth-bores, but was not an optimum solution for rifles because if the fit was too tight, it required a mallet to ram the bullet down the barrel and if the bullet was too loose, the expanding gases would escape around the rifling grooves and edges (This technical term is called windage). Then the concept of the expanding bullet was invented in the 1800s. In this method, the bullet has a hollow base and when fired, the hollow base expands and fills the bore of the barrel and engages the rifling grooves.

The first discovery in this direction was due to one Captain John Norton of the British 34th regiment, which was stationed in South India in the early 1830s. Captain Norton had observed that some of the tribes in South India used blow-pipes and he examined some of the darts that they used. He noticed an interesting fact that the base of these darts were made of an elastic pith (pith is the soft spongy wood found in the center of tree trunks). When the tribesman blew in the pipe, the pith base would expand and form a tight seal, thereby preventing air leaks and increasing the range of the weapon. Captain Norton decided to copy the same principle for bullets as well and invented a cylindrical bullet with a hollow base in 1832.

A few years later in 1836, Mr. William Greener, a well-known London gunmaker, improved on the Norton bullet by making a design known as the conoidal expanding bullet.

It consists of an oval shaped bullet where the longest diameter of the bullet exceeds the shortest diameter by a ratio of 1.5 : 1. One end of this bullet has a flat surface and a hole drilled into it, nearly through the length of the bullet. The hole is covered by a tapering conical plug with a round button shaped head, made of wood. The plug is fitted loosely into the hole and the bullet is put in the rifle with either end of the oval foremost. When the gun is fired, the plug is rammed home into the bullet and it expands and fills the bore of the rifle and the grooves and thereby prevents windage from happening (i.e. prevents gas from escaping around the sides of the bullet and via the grooves).

Unfortunately for Captain Norton and W. Greener, the British Ordnance Department rejected both their inventions and never developed any weapons using these bullets. The trial of W. Greener's bullet was conducted in August 1836 by the 60th rifles, and in spite of the trial proving that these bullets were as easy to load as spherical bullets on smoothbore weapons, the invention was rejected on the grounds that the bullet was a compound bullet.

However, W. Greener's idea was later abstracted by a Frenchman, one Monsieur Minie, who invented the Minie ball and the Minie rifle to go with it, in 1849. The Minie rifle was invented as a response to Algerian fighters who would regularly outrange French troops using their hand-made long rifles. 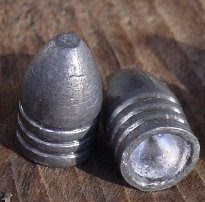 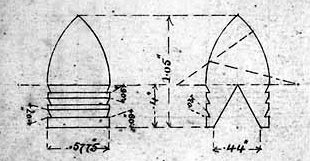 Images based off public domain images courtesy of wikipedia.com

The Minie rifle that used this bullet was a muzzle-loading weapon with a percussion lock firing mechanism and a rifled barrel. Paper cartridges, each containing a minie ball and a pre-measured amount of gunpowder were issued with the weapon. To use the rifle, the user would pour the gunpowder into the barrel and push the minie bullet in through the top. Since the minie bullet is smaller in diameter than the barrel, it is easily pushed through, even if the barrel has some fouling and detritus in it. When the gun is fired, the expanding gases make the bullet deform and engage the grooves in the rifling. The rifling then serves to provide spin to the bullet, thereby providing more accuracy. The expansion also makes a tighter gas seal, which gives greater range and it also cleans the grooves of detritus as well.

The Minie rifle was used by both French and British troops in the Crimean war (1853-1855) against Russia. Other rifles using the Minie bullet principle were heavily used by both sides in the American Civil war, where it was the most common rifle used. The US versions of the bullet (adopted before the civil war) had three exterior grooves on the bullet instead of four. The US versions also had thinner walls near the base and omitted the iron cap at the base, as the pressure of the expanding gases was enough to deform the bullet by itself. The wounds caused by the Minie bullet were staggering and surgeons of the day often amputated limbs rather than trying to remove bone fragments and risk secondary infection.

The British adopted the Minie Pattern 1 between 1852 and 1855, where it was replaced by the newer Enfield Pattern 1853 rifle, which also used a Minie bullet. The Enfield Pattern 1853 rifle served the British empire between 1855-1867 and was one of the causes of the Indian mutiny of 1857. This rifle model was the one that was issued to troops of the East India company in 1857 and rumors were spread that the paper cartridges were greased with pig fat and cow fat, which were abhorrent to the sepoys for religious reasons.

The Minie rifle and its derivatives became obsolete around 1866 or so, when they were replaced by breech-loading rifles. One of the main disadvantages of all muzzle-loading rifles was that the soldier had to stand up to load the weapon, whereas a breech-loading weapon could be loaded from the prone position. Despite all improvements to muzzle-loading weapons, a breech-loading weapon could still be loaded much faster than a muzzle-loading one. The clear advantage of the breech loading Dreyse needle-gun used by the Prussians against the Austrians spelled the end of muzzle-loaders in general and the Minie rifle became obsolete along with other muzzle-loaders of the day. However, the concept of a bullet that deforms and engages the grooves of the rifled barrel has stayed with us to this present day and modern firearms still use this principle.
Posted by The Editor at 10:35 PM