In the last two actions that we studied previously, the short recoil operated action and the long recoil operated action, the common feature to both is that the bolt and barrel are allowed to recoil, while the rest of the firearm remains immobile. Today we will study another type of recoil action called the Inertia Recoil Operated Action.
In this type of action, unlike the other two types, the bolt is held immobile initially and the rest of the firearm is allowed to recoil around it. This means that the recoiling parts form a greater mass than in the other two types of recoil actions that we studied previously. That implies that this action is suitable to be used by firearms with heavier loads, such as large bore shotguns. The original design for the inertia recoil action was done by Bruno Civolani in 1967. He tried to sell the design to several manufacturers, but was not successful until he approached an Italian firm named Benelli. Until then, Benelli was largely a moped and motorcycle manufacturer, but they were also exploring the business of firearms and they produced their first firearm using this action in 1969. The action became somewhat popular due to its fast rate of fire (about 5 rounds/sec). Since then, Benelli has manufactured a number of shotgun models that use this design and has also licensed the design to a few other manufacturers such as Franchi (Italy) and Stoeger (Turkey). Currently, the Benelli, Franchi and Stoeger brands are now all owned by Beretta S.A. of Italy. 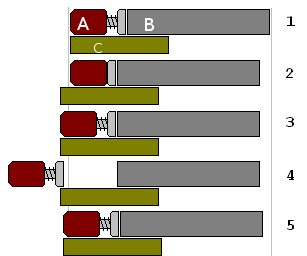 Block diagram of the Inertia Recoil Operated Action. Public domain image.
In the above diagram, at step 1, bolt body A and barrel B are initially locked together and C is the frame of the weapon. The bolt body and barrel are joined together by a inertial spring. After it is fired (step 2), the bolt body A remains stationary while the firearm recoils into the shooter's body. As a result of this, the parts B and C move backwards and compress the inertial spring between A and B. Then in step 3, the inertial spring that was compressed in step 2 begins to expand and push bolt A backwards. At this point, the bolt A is unlocked and allowed to be pushed fully backwards as shown in step 4. The bolt has an extractor that pulls out the old spent cartridge case backwards and ejects it at this stage. The bolt moves backwards fully and compresses a recoil spring (not shown) at the back of the weapon and also re-cocks the weapon. Then in step 5, the recoil spring pushes the bolt forwards again and it picks up a new cartridge and the bolt is locked to the barrel and the cycle begins again.
The reader may be interested in an animated video of the above action, to get a better understanding of how it works.
The inertia operated system is known for its simplicity, since there are only 3 primary parts in the action: the bolt body, inertia spring and rotating bolt head. This also means the weapon is fairly light weight as well. Compared to gas operated actions, this action requires less cleaning since the fired gases do not enter the working mechanism and hence there is no carbon buildup. However, they generally have transmit a bit more recoil to the user than a gas operated system. As mentioned above, this is an extremely fast action compared to a long recoil operated action. It is also very versatile as it is capable of firing various types of cartridges of different firing powers, without re-adjusting the action at all.
As a demonstration of the speed of shooting an inertia action weapon, here's a video of a world class exhibition shooter, Tom Knapp, demonstrating how to shoot 10 clay targets with a single throw. Note that he mentions that his shotgun is a stock off-the-shelf model with only two extra accessories: a magazine extension to hold more rounds (the Benelli shotgun model he is using only holds 3 + 1 rounds without the extension) and his fiber-optic sight.

Benelli, Franchi and Stoeger are all known for their quality shotguns. The Benelli M3 shotgun in particular, is a favored weapon carried by SWAT teams.
Posted by The Editor at 12:00 PM