In our last post, we studied the basics of a Short Recoil Operated Action, as well as some different weapons that use it. In this post, we will study one more variant of the short recoil operated action, the toggle lock recoil action. This variant of the short recoil operated action was originally used by the world's first machine gun, the Maxim. It was later used in some small arms, notably the Hugo Borchardt designed C93 pistol and later on by the Luger pistol.
The C93 pistol was one of the first successful commercial semi-automatic pistols. Hugo Borchardt was a German born inventor, who later emigrated to the United States, became an American citizen and worked for several well known American firearms manufacturers, including Colt, Winchester and Remington. He later emigrated back to Europe and was employed by the Ludwig Loewe company when he invented his pistol in 1893. 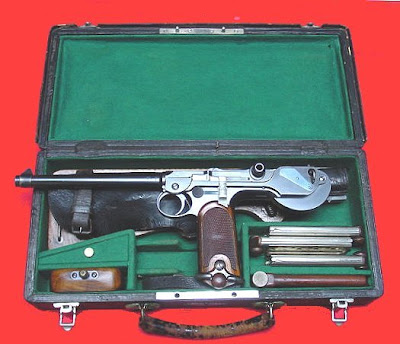 Source: http://www.adamsguns.com
The copyright holder of this file allows anyone to use this image for any purpose, provided the copyright holder is properly attributed.
The pistol was fairly successful, despite the fact that it was mechanically complicated, expensive to produce and hard to handle. Note the almost vertical grip and the big, ugly, semi-circular mainspring hanging out of the back of the weapon. These two features make it harder to aim the pistol quickly and affect the overall balance.
Hugo Borchardt was an easily offended man by nature and he believed that his design was perfect and couldn't be improved. As a result, another employee of the Loewe company, Georg Luger, was tasked with improving the design, which he succeeded in doing in 1896. The Luger design started with the basic Borchardt designed mechanism, but had an angled grip that made it easier to point, added a new grip safety, removed the C93's mainspring and replaced with a leaf spring, improved the balance, redesigned the cartridges used etc. The new pistol was originally adopted by the Swiss army in 1900 and was later adopted by the Germans in 1908. Since the Germans adopted it in 1908, they named it as Pistole-08 or P-08 for short. The words for "zero eight" in German are "null acht", hence this pistol was also known in Germany as the "null acht". The pistols originally used 7.65x22 mm. cartridges, but Luger invented a different sized cartridge for the German army and redesigned the pistol to use this new cartridge: the famous 9x19 mm. parabellum cartridge, also popularly known as the "9 mm. Luger" cartridge. The 9x19 mm. cartridge is still with us today and is the most common military handgun cartridge in use currently.
The Luger was used heavily by the Germans in World War I, produced by both Erfurt Arsenal and DWM (the Loewe company had been renamed to Deutsche Waffen und Munitions Fabriken (DWM) by this time). After the war, the allies restricted production of most weapons for a while, until a German company called Simson was allowed to manufacture Lugers after 1925. Ironically, the Nazis later forced the Simson company to close before World War II, because the owners happened to be Jewish! The Mauser company continued to manufacture Lugers until the end of World War II. Lugers were later replaced in military service by more modern designs, but there are still some private manufacturers making Lugers to this day.
The most distinctive feature of a Luger (and its C93 predecessor) is its toggle lock mechanism. It works similar to the principle of a human knee. Note that a human leg can withstand a lot more pressure when the knee is straight and locked, but once the knee is bent, the leg suddenly becomes much easier to bend after that. The toggle lock mechanism works very similarly. When the weapon is initially fired, the toggle lock mechanism is straight. The recoil causes the barrel and toggle lock initially move back together on rails. Due to the toggle being straight, it doesn't move backwards easily initally. After a little bit of movement, the toggle part begins to ride over a pair of cams that bend the toggle at the joint. Once the toggle lock is no longer straight, it bends much more freely, allowing the bolt to accelerate backwards and recock the weapon. An extractor at the end of the toggle pulls out the old cartridge and ejects it. A recoil spring then pushes the bolt forwards again, whereupon it strips a new round from the magazine and pushes it in the chamber, ready to fire. The movies below show how this works:

This design had a few disadvantages though. For one, it was a fairly complicated mechanism and required precisely fitted parts to work properly. The tolerances required for this design are very tight and parts often had to be hand-fitted for it to work right. These tolerances contributed greatly to the accuracy of the weapon, but took away the reliability. In fact, small amounts of dirt on the exposed firing mechanism parts, especially on the left hand side, could cause the weapon to jam. The Luger was expensive to produce, even for its time, and it was competing in the civilian market with the Colt M1911, which was cheaper to produce and more reliable in operation.
This is why there are no other modern weapons that use this particular variant of the short recoil action mechanism.
Posted by The Editor at 12:24 AM