In our previous post, we studied the basics of recoil operated actions. In this particular post, we will study one of the types of recoil operated actions, i.e. the short recoil operation.
This action type has a long history, being the action that was used in the first machine gun ever invented, i.e. the Maxim machine gun. It is also the action of choice for most semi-automatic and automatic pixels that use 9 mm. Luger (9x19 mm.) cartridges or bigger. Smaller and lower powered cartridges are used with blowback actions that we studied last month, but once the cartridges get beyond a certain size and power, a blowback action cannot be used any more and most modern pistols therefore use a short recoil operation.
As we noted in our previous post, one of the key differences between a blowback action and a recoil operated action is that a recoil operated action has the bolt (i.e. the metal block that holds the cartridge in the chamber before firing) is locked at the point of firing, whereas a blowback action merely has it held under spring pressure. This enables the recoil operated action to fire heavier cartridges. Also, as we noted previously, in a recoil operated action, some parts of the weapon are allowed to recoil backwards, whereas other parts are held stationary relative to the recoiling parts. In a short recoil action, the parts that are allowed to recoil are the barrel and the bolt.
At the point when the bullet is fired, the barrel and the bolt are locked together and move backwards due to recoil. After a short distance of travel (a few mm. in the case of pistols and a few caliber lengths in the case of machine guns), the bolt and the barrel disengage from each other. How this is achieved is what differentiates various short recoil operation systems. In some cases, the barrel is slowed down, in other cases, the bolt is accelerated. In either case, the barrel stops moving, whereas the bolt continues to move backwards and compresses a recoil spring and also extracts the old cartridge case at the same time, which is ejected via a side port. The recoil spring then pushes the bolt forwards and as the bolt moves forwards, it picks up the new cartridge from the magazine and pushes it and the barrel forwards. When the barrel reaches its forward position again, the bolt and barrel lock again and the weapon is ready to be fired.
As was mentioned above, in some systems, the barrel is slowed down to separate the barrel from the bolt. Weapons that use this include the classic Colt M1911 pistol designed by John Browning, all Glock pistols, Smith & Wesson, FN Browning, SIG Sauer etc.
In the case of the Browning designed Colt M1911, the bolt, barrel and slide all move backwards together initially, but then a barrel link tilts the barrel downwards. As the barrel tilts, the barrel locking lugs unlock themselves from the slide recesses. The bolt and slide continue to move backwards and an extraction claw on the slide also pulls the spent cartridge out of the chamber. 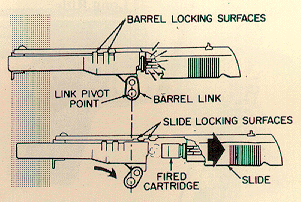 In the case of Glock, SIG Sauer and most recently designed automatic pistols, this mechanism is even more simplified. There is a downward inclined ramp attached to the back of the barrel. As the barrel and slide move backwards, the ramp contacts a fixed stud on the pistol's frame. This causes the back of the barrel to move down (and the front to tilt up), which moves it out of engagement with the slide. The rest of the action is similar to what was described earlier. The animation below shows exactly how this works:

In the above three animations, the one thing is common is that the bolt and barrel initially move backward together and are then separated by slowing down the barrel while leaving the bolt and slide free to continue moving backwards.
Another way to achieve this separation is by accelerating the bolt after they both move back together. This mechanism is most commonly used today in the 7.62 mm. and 12.7 mm. M2 machine guns invented by (surprise, surprise) John Browning! The 12.7 mm. M2 is still used in the famous Abrams tank, as well as most other western tanks, which shows the reliability and timelessness of this design. In the M2 machine gun, the barrel and bolt initially recoil together about 10 mm. backwards and then a rotating cam in the receiver disconnects the bolt from the barrel. The barrel has an extension in the back and bottom of the barrel. After the bolt and barrel are disconnected, this extension then strikes a short, curved lever. The lever is pivoted so that it has a mechanical advantage and therefore it pushes and accelerates the bolt rearward. A fixed stud stops the barrel extension, which also halts the barrel, while the bolt continues rearward. As before, we have an animation to show how it works:

We will continue studying short recoil operations tomorrow, where we will deal with some more historical short-recoil operated weapons such as toggle-bolt short recoil actions. It'll be interesting reading!
Posted by The Editor at 9:02 PM