In the last post, we studied some details about laser sights. The next type of sight that we will study in this post is called the reflex sight.
When we studied telescopic sights, we noted that scopes have reticles (crosshairs) etched inside to indicate where the barrel is pointing to. Similarly, one of the key features of all laser sights is that they project light towards the target to show where the weapon's barrel is pointing to. Reflex sights also have reticles, like telescopic sights, but there is one important difference in how the reticle is displayed. Reflex sights feature a beam splitter or a dichroic mirror. The image of the target is combined with a reflected image of a reticle and projects the reticle image on top of the target image. The reflected reticle image can be illuminated if needed, thereby providing a clearer image of the reticle. 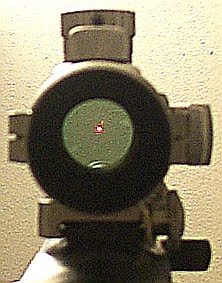 Image licensed under the GNU Free Documentation License version 1.2 or later. Original image by user Falcorian at en.wikipedia.org
In the above image, we see a reflex sight with a bright red dot projected on the image. A sight like this uses a small battery to produce the bright red spot and then projects it on to the image. There are several reflex sights like this, such as the Aimpoint series, EOTech etc. The brightness of the red dot can be increased or decreased to match the surrounding light.
One of the more common reflex sights being used these days is the ACOG (Advanced Combat Optical Gunsight) that is used by the US Army and the US Marine Corps. This type of sight is manufactured by Trijicon and comes in a variety of configurations.

Click image to enlarge. Public domain image
Different ACOG models have different magnification powers, different colors and shapes of reticles and some have features to allow for elevation. All ACOG models have an unusual feature for reflex sights in that they don't use batteries for the reticles. Instead, they use fiber optic cords for daytime and tritium lamps for night time conditions. We studied these two devices earlier when we studied how to make iron sights more visible.
Reflex sights can be used under a variety of light situations and allow quick target acquisition. The user can use both eyes to aim, when using a reflex sight. On the other hand, reflex sights add a bit of bulk to the weapon and affect its balance.
Posted by The Editor at 11:02 PM