In the last few posts, we've studied various kinds of iron sights. Now, one of the desired properties of any type of sight, not just an iron sight, is that they should be easy to see, but should not be bright enough to blind the shooter. There are a few ways that this can be ensured. We will study the methods here.
Since sights should not be very shiny and reflective, particularly the front sight, there are a few ways to reduce glare from the sights. First, there are metal treatments such as parkerizing and ferritic nitrocarburizing, which we studied about previously. These treatments not only apply a protective finish to the weapon, but also reduce the reflective glare. Another way to do this would be to simply apply some non-reflective matte finish paint on the sights. Yet another way is to bead blast the sights or cut serrations on the surface to make them less reflective. Finally, some sights have a hood around them to shade the sights and reduce the glare.
However, there is another problem to consider too. The sights should not be dark enough that they merge in with the background. There should be sufficient contrast between the sights and the background, so that they can be picked up much easier. There are several ways to do this as well.
The first method is very simple: the manufacturer simply paints a different color on the front and rear sights to make them stand out more. Image based off an original image uploaded by user Stannerd on wikipedia.org. The original image was licensed under the GNU Free Documentation license version 1.2 and permission is granted to copy, distribute and/or modify this image under the GNU Free Documentation licence version 1.2 or later.
Another way to make the sights more visible, especially in low light conditions, is to have the sights contain luminescent glass tubes. The most common way to do this is to fill the glass tubes with tritium, a mildly radioactive isotope of hydrogen. Tritium is also used in some luminescent watch dials. The glass tubes are also coated on the inside with a phosphorescent material. As the tritium decays, it emits beta particles that strike the phosphor coating and emit a glow in green, red, blue, yellow, orange, purple or white color, depending on the type of phosphor coating material used. Typically, green, yellow and orange are usually used with weapons. The glow from these tubes is not visible in bright light, so some manufacturers paint additional rings around the glass tubes so that they can be picked up easily during daytime as well. 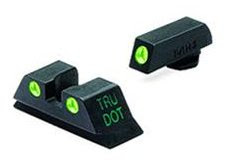 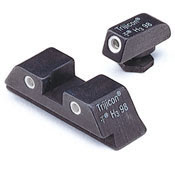 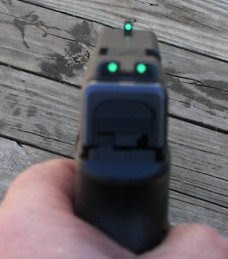 There is no battery power involved here, as the glow is created by the beta particles emitted by the decaying tritium gas. Since tritium decays very slowly, such tubes have a fairly long lifespan. In fact, one well known manufacturer (Trijicon) offers 12 year warranties for their green and yellow sights. The downside to these are that the price of these is relatively higher than some of the alternatives.
Another method is to use photo-luminescent paint. Unlike the tritium filled sights, which glow at all times, the photo-luminescent paint needs to be exposed to a bright light source first, whereupon it absorbs some energy. When the light source is removed, the paint emits the stored energy out slowly and glows green in the dark. A few minutes exposure to bright sunlight or ultraviolet light is enough to keep it glowing for several hours afterwards.

The nice thing about this method is that it costs a lot less than tritium filled tubes. An existing sight can be easily converted to a photo-luminescent sight by any owner, simply by applying some adhesive strips. The downside is that it needs to be exposed to light first to work and it automatically gets discharged after a few hours and needs to be re-exposed to light again to work.
Another method that is recently gaining popularity is to use fiber optic elements. Short pieces of fiber optic cord are affixed to the iron sights. Any ambient light falling on the sides of the fiber optic cord is concentrated at the tip of the cord. Therefore, the tip of the cord glows brighter than the surroundings and makes it easier to pick up during daylight. Typical fiber optic sights come in green and red colors. These sights are now seen on handguns, shotguns, rifles, air guns etc. Some manufacturers make sights that combine fiber optic cords with tritium filled tubes, so that the sights may be effectively used in both day and night time.
Posted by The Editor at 11:05 PM