We have recently discussed the basics of sights, as well as some history of iron sights and the two major types of iron sights, namely the open sight and the aperture sight. There are also other ways to classify iron sights. One would be fixed sights vs. adjustable sights. We discussed fixed sights in the previous post and discuss adjustable sights in this post.
The first sights that were invented were fixed sights and this was in an era where firearms did not really have as much range or accuracy. Once rifling started to become common and barrel making techniques began to improve, the range and accuracy of weapons started to increase. Hence, people found a need to have sights that could work on short ranges as well as longer ranges.
The main problem with fixed sights is that a bullet travels in an elliptical path, due to forces of gravitational pull and aerodynamics of the bullet with the wind rushing past it. Hence, for shooting at greater distances, it is necessary to point the barrel a bit upwards before pulling the trigger. Range is also affected by factors such as amount and quality of propellant in the cartridge, shape and weight of the bullet etc. Making appropriate adjustments for greater range is called elevation. With fixed sights, it is harder to decide how much to to tilt the barrel up by. With adjustable sights, this is less of a problem.
There is also movement in a horizontal direction to be considered. Due to rifling in barrels, the bullets generally tend to drift a bit from the center point. As we mentioned earlier, rifling does NOT make bullets travel in a straight line, but it gives them a predictable drift. What this means is that if you can predict for a given rifle that a bullet will drift horizontally, say, between 2-3 cm. to the right over every 100 meters distance traveled, you know that you need to compensate by the same amount to the left for every 100 meters distance to the target. There is also the need to compensate for wind blowing, which could cause horizontal deviation of the bullet. Other causes of deviation could be the profile of the bullet and its balance. Such a compensation is called windage. With adjustable sights, compensating for this becomes much easier.
The first type of sight we will look at is the leaf sight. The picture below shows a representative leaf sight.

This type of sight is fold-able for close range shooting. It also has screws for adjusting the sight in both the horizontal and vertical planes and has a number of holes in it for different ranges. This sight is mounted as the rear sight of the weapon and the front sight is fixed. To use this sight, the user estimates the distance to the target and lifts the sight. Then the user looks through the appropriate hole in the leaf sight and aligns it and the front sight to the target. The barrel of the weapon is therefore automatically tilted by the appropriate amount, as the illustration below shows:

For close range shooting, the user folds down the rear leaf sight and uses the top of the hinge as the rear sight. For longer range shooting, the user unfolds the sight and looks through the appropriate hole. There is also a windage screw to compensate for horizontal movement of the bullet.
On some weapons, e.g. the iron sights on some M-16 or AR-15 weapons, both the front sight and rear sight are adjustable. The front sight is used for fine tuning the elevation when zeroing the rifle (we will discuss zeroing sights in a future post) and the rear sight is adjustable for both elevation and windage.

Click image to enlarge.
We discussed these sights in detail previously, during our study into aperture sights.
Another popular type of sight is the tangent sight, which has been used for a number of weapons such as Mausers, Browing Hi-Power pistols, some AK-47 models etc. The picture below shows an exploded view of the parts of this type of sight on a Mauser C-96.

As you can see, the sight slider pushes tangentially against the ramp and pushes the back of the sight leaf upwards. In this case, the sight is set for maximum range and the rear of the sight leaf is pushed fully upwards. In order to align the raised v-notch of the rear sight with the front sight, the user needs to tilt the barrel upwards, which correspondingly increases the range of the weapon.
The third type of adjustable sight we will study is the ladder sight. The ladder sight is usually foldable. It has a movable slider and a graduated scale on one side of it to adjust for range. 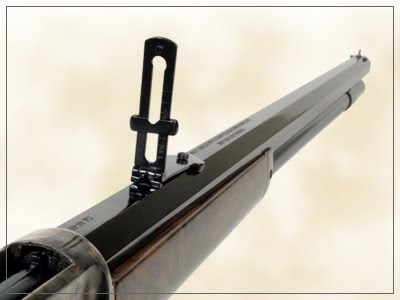 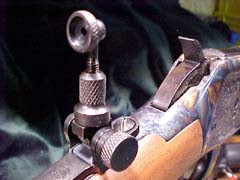 Tang sights can generally be raised and lowered by means of a screw thread. The above example can also be moved horizontally to adjust for windage. The bolt heads on the tang sight have a graduated scale so that the user knows how much to lower it or raise it to adjust for various distances. Like the ladder sight, a tang sight can be folded when not in use.
The more top-of-the-line ladder sights and tang sights feature precision devices like vernier scales or micrometer gauges for more accurate aiming. The picture below shows one example of a ladder sight with a sliding vernier scale. The slide is moved by turning the knob on top of the sight, which drives a screw thread. 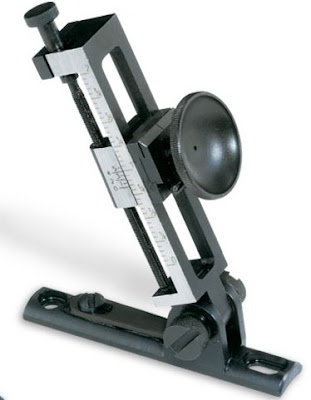 Savvy rifle owners in the wild west would often buy rifles from Winchester, Sharps, Remington etc., but replace their default sights with one of these precision sights made by third party manufacturers, such as Marble Arms Co. and Lyman Gun Sights Co.
Another type is an adjustable folding type sight. The example below is an Matech Buis sight which can be used as an aperture sight on several rifles, such as the M4, Sig etc. 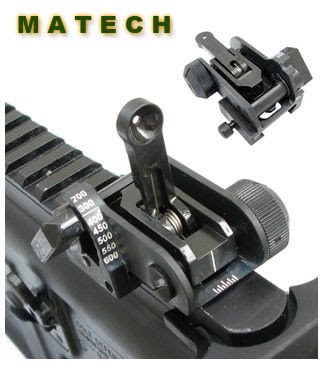 This particular sight is mounted as a rear sight and can adjust for both elevation and windage using the two knobs.
With adjustable sights, it becomes much easier for the user to aim at targets at different ranges. This is why longer range weapons feature adjustable iron sights. While most longer range weapons these days usually feature telescope sights for accuracy, adjustable iron sights are often still present as backup sights.
Posted by The Editor at 10:49 PM