We've looked at some of the most common bad stances with handguns in the last few posts. In this post, we will look at some miscellaneous bad stances and grips. 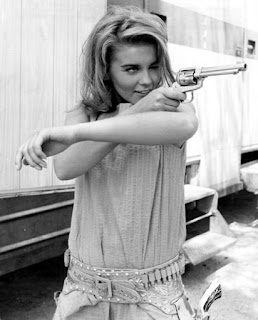 The first image we have here features actress Ann Margret. Note how she uses her weaker arm as a support for the stronger hand. However, note that the weaker arm isn't really resting on anything. So, in effect, she is really firing one handed, because the weak hand is not doing anything to really support the strong hand. This position shows up in some cowboy movies. 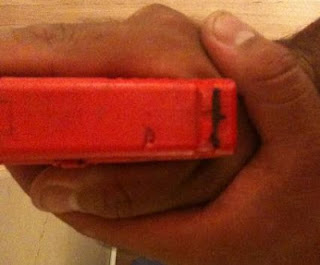 The next bad habit we will look at is a bad grip technique. Notice where the thumb of the weak hand is placed. That's right, it is placed behind the slide. Why is this a bad way to hold a pistol? Because when the user pulls the trigger, the cartridge will fire and then the slide will move backwards at a very high speed to eject the spent cartridge. If the thumb is placed in the path of the slide, it will cause a painful cut or a broken thumb. Both thumbs should be placed so that they do not interfere with the backward movement of the slide.

Another bad habit is to lean backwards when firing. This is especially seen when the person cannot really handle the recoil of the handgun. 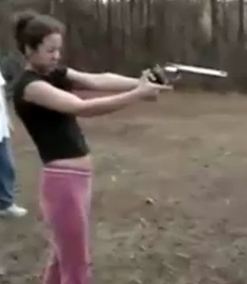 As you see here, the young woman is leaning backwards instead of forwards.

Finally, there is this infamous video floating around, of a young woman trying to shoot a .50 caliber Desert Eagle:

Her biggest mistake here is attempting to fire a weapon that is much too powerful for her to handle. The bigger idiot here is her boyfriend though, for talking her into firing something that she's clearly not used to. She's lucky that she or someone else wasn't seriously hurt.