In this post, we will discuss a technique that is often seen in cowboy western type movies (i.e.) shooting from the hip. 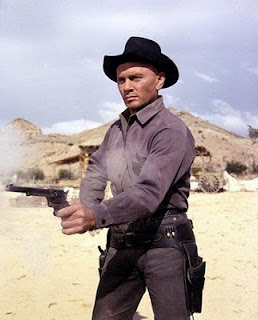 We have a representative image of this technique, as demonstrated by movie actor Yul Brenner. Notice how the revolver is fired at about the hip level, which means the shooter is not using the sights to aim it.

This technique is only used in short range situations, as one cannot be sure of hitting a target at longer distances without using the sights. It is employed in quick-draw situations where the shooter may not have the time to draw the firearm to eye-level. The shooter draws the firearm from the holster and shoots it as soon as possible.

As can be imagined, this technique is only useful at short ranges, because the sights of the weapon are not used at all. It is used when great speed (but not necessarily great accuracy) is needed. Therefore it is possible to miss the target completely as well. There is also a risk of accidentally discharging the firearm during the process of drawing it from the holster and shooting oneself in the leg.
Posted by The Editor at 3:31 AM