In our last post, we looked at the Chapman stance. In this post, we will look at a stance that was around for a while, but only gained popularity in the 1980s, the Isosceles stance.

Before we go into studying this stance, let us discuss the term "isosceles". Readers with experience in mathematics, engineering or drafting would have encountered this word before: an "isosceles triangle" is a triangle where two of the sides are of equal length, similar to the image below: 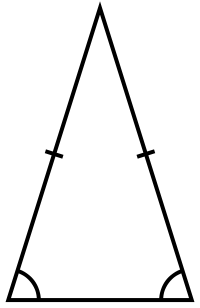 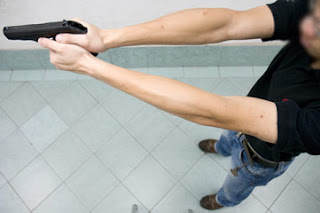 Notice how the shooter's arms are both held out extended fully, so that they resemble the two sides of an isosceles triangle. 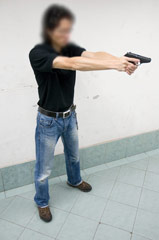 In the traditional isosceles stance, the shooter stands with the body in an upright position, with both feet placed parallel to each other and pointing at the target. The knees are kept mostly straight.

The other stance is the modern isoceles stance or modified isosceles stance, which is shown below: 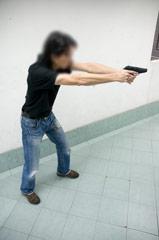 In the modern stance, the shooter keeps the feet apart about a shoulder width, but positions one foot ahead of the other. The knees are slightly bent and the upper body leans forwards toward the target.

With either stance, the upper body is rotated left or right as needed, to aim at targets that are not directly ahead of the shooter. This stance provides good support to the shooter and either eye can be used to aim at the target, as the gun is held at the center between both eyes. Unlike the Weaver or Chapman stance, the shooter absorbs recoil using their entire body. Also, if the shooter is wearing body armor, then this exposes the full body armor to the enemy (unlike the weaver or chapman stances, which expose the weaker armpit area to the enemy).

The only problem with the isosceles stance is that it isn't as suitable to use when the shooter is moving around, because locking the joints tends to make the gun bounce around. If the elbows are slightly relaxed, then it reduces the skeletal support that this stance provides. Another disadvantage is that while this stance is suitable for smaller ammunition loads, but when using full powered ammunition, the resulting recoil feels severe and makes shooting multiple shots difficult.

This stance was around for quite a while, but didn't really gain popularity until the 1980s, when two shooters named Brian Enos and Rob Leatham used it successfully to win IPSC shooting matches. It is often the first two-handed stance taught in most firearms training courses. The Modern Isosceles stance is now preferred by many shooters over the Weaver stance.
Posted by The Editor at 11:07 PM