In our previous post, we looked at the term "best gun". As we found in our previous post, this is a term that is used to refer to a high-quality double barreled shotgun with some very specific features in it. Quite a few of these are manufactured by British firms, especially London based ones, but they are not the only ones. W.W. Greener and Westley Richards, both from Birmingham, also manufacture "best guns", as do firms from other countries around the world.

Italy also has some well-known best gun makers, such as Piotti, Fabbrica Armi d'Abbiatico e Savinelli (FAMARS), Beretta, Fabbri, Benelli etc. Their products (and prices) are comparable to some of the finest British firms. These firms are usually located in Northern Italy, which was a traditional firearms manufacturing center for centuries. The town and region of Brescia was known for its fine firearms for at least 500 years and before that, it was a hotbed for production of swords for the Roman legions. 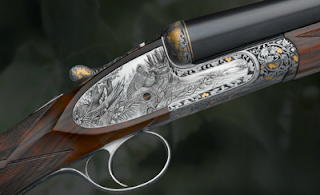 A best gun made by Piotti of Italy. Click on image to enlarge.

A best gun made by Fabbri of Italy. Click on image to enlarge.

The above two examples show the fine work of their manufacturers. The model made by Fabbri sells for over $250,000!

Not to be outdone, we have manufacturers from Spain and Belgium as well. The Spanish city of Eibar in the Basque Country region is a traditional gunmaking town from the middle ages, as is the town of Liege in Belgium. Predictably enough, the well known manufacturers of best guns come from these regions as well. Spanish best gun manufacturers such as Pedro Arrizabalaga, Armas Garbi, Grulla Armas etc. have a good reputation in the market.

A best gun made by Pedro Arrizabalaga. Click on image to enlarge

A best gun made by Armas Garbi. Click on image to enlarge.

Spanish best guns are generally priced well below their English or Italian counterparts, but they are still very high-quality firearms.

The city of Liege in Belgium was also a traditional hotbed of firearms manufacturing since the 1400s or so. The various manufacturers based around this city used to produce firearms of varying qualities: see our discussion on spurious firearms for some low quality specimens. It has also produced some very high-quality products as well. Most of the manufacturers in and around Liege have gone out of business at the present time, but there are a few small manufacturers still in business and also the 800 lb. gorilla, Fabrique Nationale (FN), which continues to make best guns along with military rifles, pistols, revolvers etc. These guns normally retail for about $15,000- $80,000 or so.

Germany also had a few best gun manufacturers in history, mostly located around the town of Suhl, which (surprise, surprise) has a long history of gunmaking. After World War II, the town of Suhl went to East Germany and thus, the firearms industry in that town went into decline, as the communist government strongly discouraged private arms manufacturers. After German reunification, the town has recovered some of its former glory -- the school of firearms engraving and the Guild of Master Gunsmiths are now both located here. The only major manufacturer still in Suhl is the firm of Merkel, but some of the other well known German manufacturers such as J.P. Sauer & Sohn, Krieghoff etc. moved to West German towns after World War II and are still in business. J.P. Sauer & Sohn, founded in 1751, is well-known for their SIG Sauer line of pistols, but they also manufacture best guns.

German best guns tend to be heavier than their English or Italian counterparts and tend to be very strongly built. They also tend to have deeper engraving. Because their style is different from the "London Best" style followed by British, Italian and Spanish manufacturers, the demand is lower and hence they are lower priced. However, they have very good strength and quality of workmanship.

Finally, we have the United States. At one time, there were many best gun manufacturers in the good ol' USA: Remington, Parker, Winchester, Lefever, Ithaca etc. Most American best guns are heavier than their English, Italian or Spanish counterparts because they are designed to fire stronger American shotgun cartridges. American best guns are generally built for mass production, hence many lack some of the characteristics of the very best British, Italian or Spanish guns. However, the quality of engraving, checkering and finish are excellent on the high-grade guns and are comparable to other best gun products from other manufacturers. There are still manufacturers in the US that are building replica models of some of the finest shotguns made in the last couple of centuries.
Posted by The Editor at 1:15 AM