What is a Cows Knee?

In our last post, we studied tompions which are devices that were invented to prevent rain, snow, mud etc. from entering through the muzzles of flintlock firearms. However, the muzzle isn't the only part of the flintlock that must be kept dry, because water can enter through another place as well. Specifically, the lock, or more precisely, the pan of the flintlock must be kept dry as well. If too much moisture reaches the black powder, it will not ignite properly, so there must be some way to protect the lock. 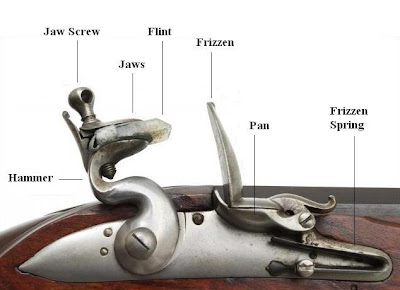 Parts of a flintlock. Click on the image to enlarge. Public domain image courtesy of wikipedia.

We will study a device called a Cows Knee, that was invented for this purpose.

A Cows Knee is merely a cover for the lock, traditionally made of leather pieces which are sewn together. The leather used in the old days was usually cattle skin or deer skin, since these were cheap and commonly available. The leather is first processed to remove all the hair and fat, then it is tanned to prevent it from decaying, then it is further processed to soften it and color it if needed. Then, the pieces of leather are cut into shape and stitched together to form the cover.

Traditional cows knees came with leather thong straps attached to the ends, so that they could be secured to firearms and held in position instead of sliding off. 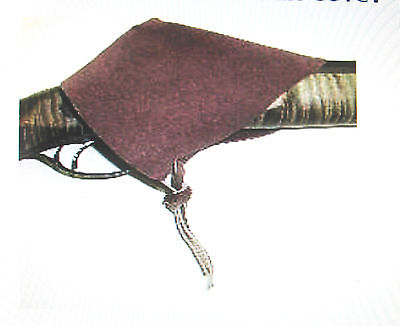 A Cows Knee with a single strap. Click on the image to enlarge 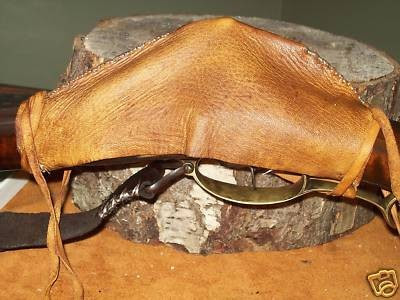 A Cows Knee with two straps. Click on the image to enlarge.

As the reader may note, the reason for the name is because it does resemble the knee of a cow, when it is tied to the firearm.

Some other materials that were traditionally used as alternatives to leather were heavy canvas cloth and wool cloth. Whether made of leather, canvas or wool, the material was oiled or greased both on the inside and outside surfaces, to repel water as well. The substance used was generally some animal grease or beeswax.

Some hunters would only tie the front thong and leave the rear one untouched. The reason for this was if they came across an animal and wished to deploy the firearm quickly, they could simply slide the cover forward or flip it over, thereby exposing the lock.

These days, some cows knees models also come with metal buttons or studs, so that people can press the ends together instead of tying knots with the leather thongs. These also make them easier to remove as well, since users don't have to fumble with knots. Some modern models are also made of plastic materials instead of leather or cloth. 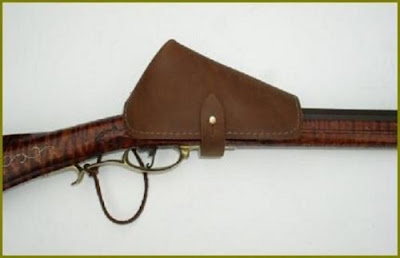 A modern Cows Knee model with a stud fastener instead of thongs. Click on the image to enlarge.

Back in the days of flintlock weapons and black powder, these devices were commonly carried by hunters and soldiers of various armies. For instance, from January 29th, 1759, we have the record of an order given by General Jeffrey Amherst, Commander-in-Chief of British forces in North America during the French & Indian war: "And every Man, is to be well clothed, and be furnished with a good Firelock, Powder Horn, Shot Bag, and Cover for the Lock of his Gun, with three Pound of Ball fit for his Gun, and a good Blanket". The "Cover for the Lock of His Gun" mentioned here is what we call a Cows Knee these days.

Cows Knees are still carried by hunters who use black powder firearms, when they hunt in inclement weather.