What is a Tompion?

Back in the day of flintlock firearms, keeping weapons operating in the rain, snow and mud was an important matter indeed. For instance, soldiers could be told to advance to a specific battlefield position, in the middle of a rainstorm. Or a hunter could have been caught in a snowstorm in the woods and didn't want to unload his weapon, in case he met a dangerous animal. To solve this issue, a device called a tompion (sometimes spelled as tampion) was invented. We will study about this device in today's post.

A tompion is simply a cylinder, usually made of wood, which is pushed into the muzzle end of the barrel, and prevents rain, snow, mud etc. from entering the barrel. When ready to fire, the user simply pulls the tompion off the end of the muzzle and then cocks the firearm. Some tompions are made entirely of wood, some have a brass cap at the end, still others are made of brass, rubber and cloth etc. 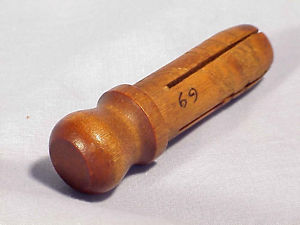 The above image is a tompion made of wood, for a Springfield M1842 musket, such as those used by both sides of the Civil War here in America. Note the "69" written on the side, which indicates the caliber of the weapon it was intended to fit into. The head of the tompion is made a bit larger than the body, so that it cannot be pushed in beyond that point. 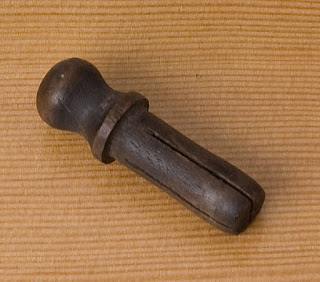 The next tompion we see is for a .58 caliber M1861 rifle used by both sides in the Civil War. Note that in both the tompions we have seen so far, they have deep slots cut into the body and the end of the body is slightly tapered. There is a good reason for this design: the tompion must fit snugly in the barrel. By making the end of the body slightly tapered, it is easier to insert into the muzzle. As it is pushed in, the slots allow the body to bend inwards to fit into the muzzle and provide a tight seal. In addition, moisture in the air could cause the wood to expand. The slots ensure that the tompion can be pulled out of the barrel without too much difficulty, even if the wood has expanded a bit.

The above images show tompions for an Enfield 1853 musket. The first image shows the complete Enfield tompion. Notice that it has a brass head cap and shaft and a body made of cork. The second image shows a tompion with the cork part removed. This type of tompion is adjustable. By turning the head of the tompion in one direction, it pushes down the cork and expands its diameter to make a tighter fit. If the head is turned the other direction, it reduces the diameter of the cork, allowing the tompion to be removed from the barrel. 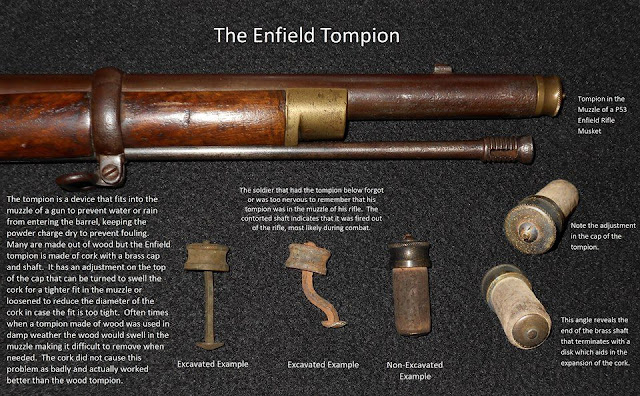 The Enfield Tompion. Click on the image to enlarge.

The next image is of something called Wilmot's Patent Expansible Tompion, invented by George R. Wilmot of Meriden, Connecticut, in 1863. 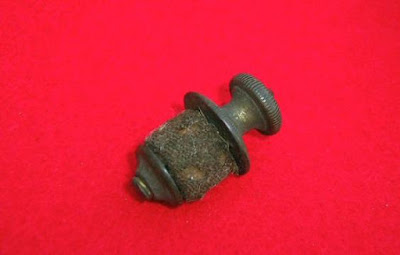 Wilmot's Patent Tompion. Click on the image to enlarge.

It is made of brass and has two disks, in between which is an elastic packing material, consisting of a rubber strip surrounded by soft cloth. By turning the top, the disks can be moved closer or further apart, which causes the packing material to expand or contract, thus making it fit properly into the barrel of the firearm.

Using tompions, users could keep their black powder weapons somewhat usable in rain, snow, mud, slush etc. and prevent corrosion as well. They were standard issue to armies in America and Europe.

Not only were tompions used for firearms, they were also used for larger cannons as well. In fact, you may still be able to see them in larger guns, such as the example below: 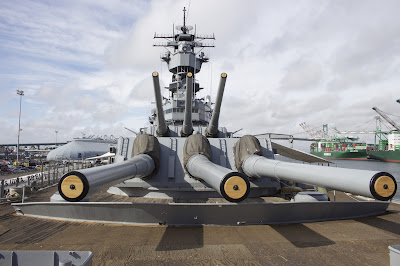 The USS Iowa. Click on the image to enlarge.

The image is that of the USS Iowa, which is now a floating museum in San Pedro, California. Note the tompions plugging the muzzles of the large guns. Fun fact: Your humble editor's wife is from Iowa, and we visit the museum about once a year or so. It is a very fun place to visit and full of history.

In our next post, we will study another piece of equipment that people carried to keep their firearms working in bad weather conditions.