In today's post, we will look at a form of powder that was used during the Civil War, called compressed powder. The origin of this powder has to do with larger guns rather than firearms, but is still an interesting point of study, since it leads down to prismatic and pebble powders later down the line. 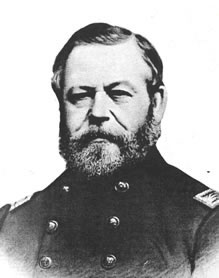 The first breakthrough into compressed powders was due to a career US Army officer named Thomas Jackson Rodman. He was an inventive man with an interest in artillery, and early in his career, he was appointed as a brevet second lieutenant in the US Army Ordnance Department, where he started working at improving cannons.

At around 1856, he noted that ordinary service powder could not be used in larger guns, because the initial gas pressure developed was sometimes high enough to cause the gun to be destroyed. The range of the gun was also reduced. The reasons are as follows:

If a fine grained powder is used for a large gun, a large portion of it is burned at the moment of ignition, due to its larger surface area (remember that black powder is surface burning and the larger the outer surface area of the powder, the faster it burns). Therefore, this causes a very high maximum pressure to be generated at the beginning and then tapers off as the rest of the powder burns, which leads to a lower average force, compared to the initial force. In fact, the initial pressure may be high enough to cause the cannon to explode with disastrous results. Therefore, the rate of combustion of the gunpowder had to be reduced somehow.

Rodman found from his experiments that he could considerably reduce this initial pressure in the gun by using disks of compressed powder, perforated by holes. The disks were made of a diameter equal to that of the bore of the cannon and between 1 and 2 inches in thickness and perforated with a number of holes.

With this type of powder, the surface area of the powder is smaller initially and only develops enough pressure to overcome the inertia of the cannon ball. Consequently, the projectile properly engages the rifling and gets pushed out with a regular motion, which is very important because accuracy depends on uniform movement of the projectile in the barrel

As the powder burns more, the surface area exposed increases due to the constant enlargement of the holes bored through the compressed powder. Due to the constant increase of the area of the burning surface, this causes a corresponding constant increase in the rate of production of the burning gases. This results in a longer and more consistent burn time inside the bore of the barrel. Therefore, the average pressure generated is higher and this increases the range of the gun significantly, without making the pressure rise to dangerous levels initially.

Rodman first published his discoveries in a scientific paper in 1861 ("Properties of Metals for Cannon and Qualities of Cannon Powder") and his ideas were put into practice in the Civil War. His special compressed powder was produced under the name "mammoth powder" and other inventors also benefited from his breakthrough, as we'll see in our next few posts.

As a result of his work, Rodman was promoted to brevet brigadier general at the end of the Civil War. He remained in the military for the rest of his life, being promoted to the permanent rank of lieutenant colonel in the US Army. Incidentally, in 1865, he was sent to Rock Island, Illinois and put in charge of supervising the construction of a new military facility, which became the Rock Island Arsenal, which still exists and is one of the largest government-owned weapons manufacturing factories in the United States.