A couple of posts ago, we saw why larger grain black powders were more suitable for larger guns and artillery, and studied two powders that were developed to handle this: compressed powder and prismatic powder. In today's post, we will study another type of black powder designed for larger calibers, which was in use in the 19th century. Today's object of study will be pebble powders.

The process of manufacturing pebble powders started off similar to manufacturing other finer grain powders, until the process of pressing the powder into cakes. The pressed cakes were formed into slabs of about 15 inches x 30 inches and thickness depending on whether P type or P2 type was being made (i.e. 1/2, 5/8 or 1.5 inches).

For P type powders, the pressed cake slabs were then fed into a cutting machine: 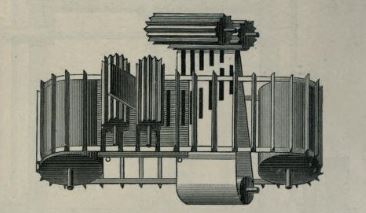 The exploded view of the machine above was invented by a Major Morgan and was in use at the Royal Gunpowder Mill in Waltham Abbey, England. It consists of two pairs of phosphor-bronze rollers which are at right angles to each other and at different heights. Each roller has knives attached to its circumference, with spaces between the knives corresponding to the required size of the powder cubes. The pressed cake enters the first pair of rollers and is cut into long thin strips and these strips then fall on to a conveyor belt which carries them to the second pair of rollers, which are at right angles to the first pair. The second pair of rollers cut the long strips into cubes.

It may be seen that if a first pair of rollers were fixed, then the second long strip cut would fall onto the first and the third one on to the second and so on and the result would be long strips piling up in one location on the lower conveyor belt. To avoid this, the upper pair of rollers are mounted on a board which is arranged to move back and forth, the basic mechanism of which is shown below.

The bottom of the board has a fixed slotted bar. The chain has a pin on one of its links that engages the slotted bar. As the chain moves along its two rollers, it pulls the board above it in a back and forth motion. This results in the long strips cut from the first set of rollers falling side by side instead of one above the other.

For P2 type powders, the cubes were generally cut by hand, by using lever-knives (i.e.) knives hinged at one end, with an handle at the other, much like a modern day paper trimmer. The press cakes were cut into long strips and then cut across into cubes.

After this, both P and P2 type powders were sent through a glazing and dusting process, to ensure that edges and corners of the cubes were rounded off and sharp edges removed. This ensured that the cubes would have a harder surface and would not produce dust or waste when being stored or transported around.

The powder was then dried similar to the process of drying the smaller grain powders, except that the temperature of drying was lower and the drying period was correspondingly longer. The drying process was slower to avoid forming cracks on the cubes. After this, a finishing process followed, with the powder being run in wooden barrels, which combined sifting the powder along with a finish glaze. A small quantity of graphite powder was introduced into the finishing barrels to give the grains a glossy finish and render them less hygroscopic.

In our next post, we will look at pellet powders.