In the last several posts, we've studied about the development of black powder. In today's post, we will study another type of powder that was briefly used in the 19th century, which was called brown powder or cocoa powder on account of its color.

The purpose of cocoa powder was to make a powder that would burn at a slower rate than black powder, for use in large artillery guns and ship cannons. It was similar to black powder, but it could be used in larger guns than what black prismatic powder was used for.

Around 1880, a company called Rottweil Pulverfabrik (translation: "Rottweil Powder Factory") from the town of Rottweil, Germany invented a new form of powder that used a different type of charcoal that was reddish-brown in color. In case readers are wondering, yes, Rottweil is also the town where the Rottweiler breed of dog was developed. 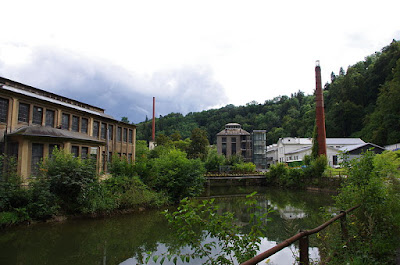 View over a part of the Rottweil Powder Factory in 2014.
Click on the image to enlarge. Image licensed under the Creative Commons Share-Alike Attribution Version 3.0 license by Andreas Koenig.


This powder had a different composition than black powder, consisting of 79% niter, 3% sulfur and 18% charcoal (whereas most black powders of that era were around 75% niter, 10% sulfur and 15% charcoal) and also contained about 1-2% moisture. The charcoal for this powder was also made in a different manner. We've studied how charcoal was manufactured for black powder earlier. Brown or red charcoal is a charcoal that is made by under-burning organic material. The material used for producing this charcoal was rye straw. The straw was piled into large stacks and stored in open air for long periods of time, the stalks being large and thick, with the ears of rye removed from it. Then, the straw was placed in large wrought-iron chambers and superheated steam was pumped over the straw for several hours. The temperature of the superheated steam was carefully controlled. The superheated steam would dissolve most of the extractive matter from the straw, but would not char it fully and the result was a charcoal of a reddish or brown color (in French, this was called charbon roux). We studied about this charcoal production process using steam earlier.

These ingredients were then mixed together and compressed into hexagonal prisms with a central hole, using the production methods used for prismatic powder that we studied earlier. This brown powder burned at a slower rate than black powder, and for equal muzzle velocities of the projectile, it produced less pressures inside the bore of the gun than black powder, and also produced less smoke than black powder as well. The more gradual development of pressure and reduction of the maximum pressure produced increased the life of the barrel and made it possible to develop lighter cannon.

The Germans adopted cocoa powder for their military in 1880. In 1884, the British Royal Navy decided to use cocoa powder for their ship guns and they bought their supplies from Rottweil Pulverfabrik. Soon after this, the French Navy also started using cocoa powder, but they developed their own version called Slow Burning Cocoa (SBC) powder around 1887. It was so successful for use in larger guns that it was sought by other militaries around the world as well. In England, they began to substitute charcoal made from rye straw with red charcoal made from wood and carbohydrates (such as sugar), to keep up with demand.

However, this powder did not burn all that cleanly (one test showed that about 43% of the powder was burned, the remainder formed large clouds of smoke) and it also left deposits in the bore. Therefore, when smokeless powders, such as the French Poudre B and the British Cordite powder were developed, brown powders became obsolete shortly after.