In our last post, we looked at a type of firearm called the blunderbuss. These weapons faded out of popularity around the end of the 18th century. In the next few posts, we will study a descendant of the blunderbuss, the shotgun.

A shotgun is typically a shoulder-fired weapon of short range. The barrel is generally smooth, though some modern shotguns may be rifled as well. Shotguns typically fire a cartridge that contains a number of small pellets (shot) or a single solid projectile (slug). The ability to fire multiple shot pellets simultaneously is what distinguishes a shotgun from other firearms. The shot pellets spread out over an area upon leaving the barrel. The force of the burning propellant is divided among all these shot pellets and hence the energy transferred to any individual shot is fairly low.

Shotguns were historically shorter than rifles and hence easier to manipulate in close quarters. However, they had  much more power than pistols, since they were designed to be supported from the shoulder. For this reason, they were traditionally used by cavalry and coachmen as a close range defensive weapon. In previous centuries, banks would send money in stagecoaches and the person sitting next to the driver would carry a large shotgun with him. This is the origin of an American slang term that still exists to the present day: "riding shotgun". For non-US readers of this blog, this slang term means the person who's sitting on the front passenger seat next to the driver in a modern automobile. A common tradition observed in the US: when a group of friends are planning to travel together somewhere by automobile, the first person who yells "shotgun" upon seeing the vehicle that they are travelling in, gets the privilege to "ride shotgun" (i.e.) sit in the front passenger seat. It is considered against the rules to yell "shotgun" before the vehicle is visible, to prevent people from reserving the front passenger seat well in advance.

Shotguns were also traditionally used to shoot birds and small fast-moving game animals (such as rabbits, hares etc.) Because these offer small targets and move very rapidly, it is difficult to aim at them exactly. Since a shotgun fires multiple shot pellets which spread out over an area, it is not necessary to aim as precisely when using a shotgun. We already discussed how to measure how the shotgun spreads its shot out in an earlier post.

Shotguns are also used by military and police as short-range weapons, especially useful in trench warfare, urban combat and riot control situations. The shotgun has been in and out of military use throughout history, but the US military rediscovered its usefulness around World War I and it has remained in use since then. The picture below shows some US Marines in action in November 2005. Note that the Marine in front is carrying a shotgun. 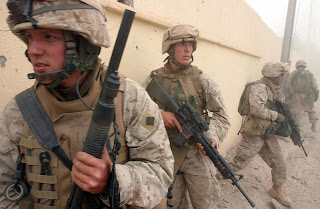 Shotguns are also very popular for home-defense use because of the spread-out nature of shot (i.e.) it is not necessary to aim accurately, which comes in useful if there is a break-in at night. A shotgun fired in the general direction of an intruder results in multiple wounds to the intruder, which is likely to incapacitate him or her. However, since each individual pellet has lower power than a rifle, it is less likely to penetrate the walls and injure a neighbor or a bystander. A shotgun also looks more intimidating than a pistol or revolver. Additionally, the distinctive click sound of a shotgun being cocked is often enough to deter many would-be burglars.

Shotguns typically come in a number of calibers, from a small .22 caliber shotgun to massive punt guns. They take a variety of ammunition types: shot pellets, solid slugs, bean bags and rubber bullets (for riot control and non-lethal use), tear gas or pepper spray (for riot control), breaching rounds (for destroying door locks and hinges) etc. We will study all these types of ammunition as we study shotguns in future posts.
Posted by The Editor at 11:02 PM