In this post, we will look at a class of shotguns called "hammerless" shotguns. To understand hammerless shotguns, first let us look at a shotgun that has hammers. 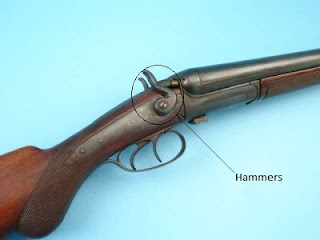 The above picture shows a double-barreled shotgun. The hammers are the two roughly S shaped pieces you see in the image. To cock the shotgun, the user pulls back the hammers using the long spurs at the end of the hammer, until they lock when pulled back. Then the user applies a percussion cap to each of the brass nipples of the shotgun. When the user pulls a trigger, the hammer is released. Due to a spring attached to the hammer, the hammer strikes the percussion cap with considerable force, which detonates it and then discharges the firearm. This sort of design has existed since the earliest shotguns.

Now that we know what a shotgun with a hammer looks like, we will now look at a hammerless shotgun. 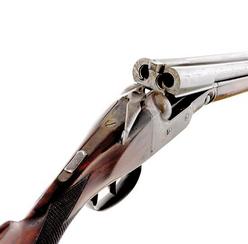 In the above picture, we have a hammerless shotgun. Note the absence of the two hammers near the open end of the barrels (the breech). The lever that you see behind the barrels is merely a lever that holds the barrels down when the shotgun breech is closed. So does this mean that this weapon has no hammers? Actually, this weapon does have hammers, but they are hidden inside the weapon. The word "hammerless" is a misnomer and it should really have been called "internal hammers".

Unlike the first shotgun we saw, which had external hammers (or exposed hammers), a hammerless shotgun actually has internal hammers, which are hidden inside the action, as shown in the figure below 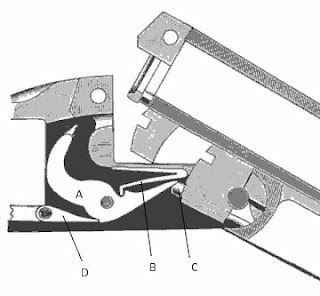 In the above diagram, A is the hammer. In this above design, when the barrels are tilted downwards, the projection C rotates the hammer A backwards, against the pressure of spring B. The hammer A rotates until the lever D catches it and holds it in place, as shown in the picture above. When the user pulls the trigger, the lever D pivots and releases the hammer A, which then allows spring B to expand and makes the hammer strike the base of the cartridge, thereby discharging the shotgun.

One of the disadvantages of an external hammer is that the hammer spurs can get caught on items, such as clothing, small branches etc. and thereby cause accidents or failure to fire. With internal hammers, such an event is not possible.

The first hammerless shotguns came some obscure French and Belgian manufacturers in the early 1800s. In the 1830s, there was a hammerless shotgun developed by a Prussian gunmaker named Dreyse. We studied this gun when studying the side-motion action. 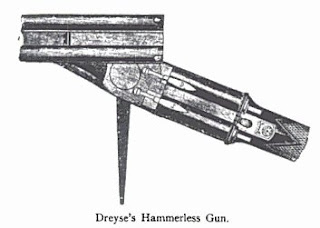 In here, turning the lever at the bottom, not only rotated the barrels around an eccentric path, they also cocked the two internal hammers.

The next advances were by an English gunmaker named Needham in 1856 and another English maker named Daw in 1862: 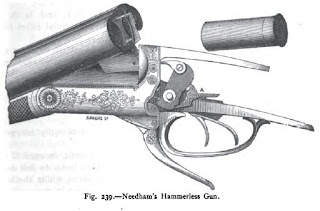 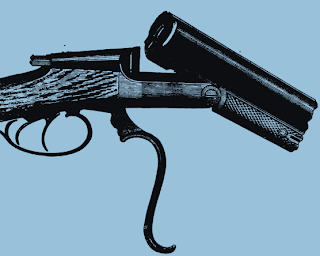 Shotgun made by Daw in 1862. Click image to enlarge. Public domain image.
In these versions, a long lever is placed in front of the triggers, as can be seen in the figures above. This lever can be pushed out to cock the internal hammers and eject the old cartridges and then folded back into place. Many of the early hammerless shotguns used a plan like this.

Of course, with such an approach, the user has to open the breech, then push the lever to eject the old cartridges and cock the gun, pull the lever back into place, then put in new cartridges and then shut the breech and lock the barrels into place, before firing the weapon. In order to make the whole process more efficient, some manufacturers attempted to reduce some of these steps.

During the period of 1875 to 1878, several London and Birmingham gunmakers attempted to make self-cocking guns, which would get cocked automatically upon opening the breech. The first successful hammerless action of this type was the Anson and Deeley action, which was invented in 1875 by two gunsmiths named Anson and Deeley, who were then working for the British manufacturer Westley-Richards and later formed their own company. They were followed by other British manufacturers such as Green, Scott, Parson, Rigby, Greener, Purdey, Walker etc. One such action working on these principles was already described above and we reproduce the illustration again so that the reader doesn't have to scroll up.

The basic Anson and Deeley design quickly became the dominant form of hammerless action and has remained almost unchanged to the present day. Since the original design had only 4 moving parts, it was cheaper and more reliable than other hammerless actions of its day, which contributed to its popularity.

In America, the first hammerless design was by Daniel LeFever in 1878. At that time, he was working with a partner named John Nichols in Nichols & LeFever Co. Like the early European designs, his shotguns had a separate lever to manually cock the shotgun. In 1880, LeFever formed his own separate company, the Lefever Arms Company. In 1883, he improved his hammerless design so that the separate lever was no longer needed. Unlike the European designs which would cock the internal hammers upon opening the breech, his 1883 design would cock the internal hammers upon closing the breech. He also later patented an automatic ejector which would eject the old cartridges when the breech was opened. In 1912, the Lefever Arms Company branched out into manufacturing gear boxes (selective and planetary transmissions) and jackshafts for the newly emerging automobile industry. Lefever Arms Company was an independent manufacturer until 1916, when the gear manufacturing side was merged with the Durston Gear Company and the firearms manufacturing side was bought out by the Ithaca Gun Company. The Ithaca Gun Company made some cheaper weapons using the LeFever name until 1941, but these weren't very good quality and were only exploiting the good reputation of the LeFever brand name. Original Lefever Arms Company guns from before they were bought out, still command high prices today and are regarded as some of the finest shotguns ever made in America.

"Hammerless" actions exist for other types of firearms as well. For instance, one can also find revolvers and pistols that have internal hammers.
Posted by The Editor at 10:17 PM