Shotguns: Why are shotguns used to break locks and why not other firearms?

In many movies, there's a scene where the upstanding hero comes running around a corner, only to be confronted by a locked gate. No problem at all for the hero, he simply pulls out his trusty pistol and shoots one through the lock and then dramatically flings the gate open. Now, let's move on to real life scenarios: when we watch US forces in action in Iraq (or police on TV), there's usually one soldier carrying a M4 or M16 rifle in his arms and a shotgun on his back. The shotgun is used to break through doors. So why do they carry such a heavy firearm, if a pistol can do the job?

One of the reasons people use shotguns is because they can use special breeching rounds with them. We just studied breeching rounds two posts earlier. One of the advantages of breeching rounds are that the slug is designed to disintegrate on impact, so there's a far smaller chance of the round bouncing off or penetrating the door and accidentally injuring the shooter, a team-mate or an innocent bystander. That's very useful in confined areas and such. There are also other reasons, which we will study about here.

First thing the reader ought to learn is never believe everything you see on TV or in Hollywood movies. The first question is whether a pistol can actually penetrate through a lock. There was an interesting article on this subject posted earlier on theboxoftruth.com and we will merely post the summary here (visit the link for full details and pictures of the actual tests). The author of that article bought a bunch of laminated steel padlocks, similar to the one shown below: 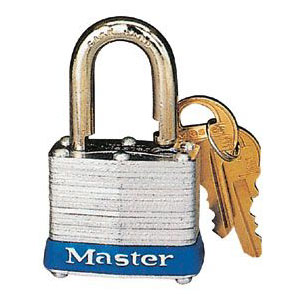 These are fairly cheap locks (typically cost about $5-$10 each and cheaper if you buy six at a time) and very commonly used. Then the author of the article lined them all up and shot them from a distance of 15 feet. This was far enough so that they could avoid any ricochet problems. Note that Hollywood heroes never worry about such matters and usually shoot with the handgun held about a foot away from the lock, which is a darned stupid thing to do in real life.

In the case of handguns, the author tried using a 9 mm. pistol first (firing a ball and then a jacketed hollow point bullet), a .45 ACP (the all-american favorite!) and even a .44 magnum revolver (the Dirty Harry gun) with a jacketed hollow point bullet. In all the cases, the bullets just bounced off the locks, leaving minor dents. In the case of the .44 magnum, one pin was blown upwards off the lock due to the impact, but it still held just fine. So that's one Hollywood myth dealt with, now on to bigger weapons.

The author next fired at the locks with different rifles. First he tried with an AR-15 (the civilian version of the M16), firing 5.56 mm. XM-193 ball ammunition and also Remington .223 soft point. The rifle bullets did penetrate fully through the lock, but they all left a small hole in front and a larger hole in the back and the pins all held. In order to fully open the lock, a person would have to fire multiple times to break all the holding pins. The author also fired at a lock using a FN FAL using a .308 caliber Winchester round (i.e. civilian version of NATO standard 7.62x51 mm. cartridge) and also a .30 armor piercing round. In both cases, the rounds did blow the lower half of the lock off, but the upper part still had pins holding the lock closed. As with the AR-15, a person would need to shoot the lock multiple times to unlock it.

Finally, the author tried shooting it with a 12 gauge shotgun (this is the most popular bore size for shotguns). Since the author didn't have access to breeching rounds, he tried using a Brenneke slug instead. Result: the shotgun simply blew the padlock body to pieces with the very first shot and the padlock easily opened.

Conclusion: pistols and revolvers don't have what it takes to even penetrate a cheap, commonly used lock. Rifles will penetrate such locks, but do not reliably open the lock with a single shot. Therefore, a person needs to take multiple shots at the lock to unlock it when using a rifle, which loses the element of surprise. Only a shotgun will reliably break locks with a single shot. Add to that the fact that ricochet risks are significantly reduced when using a special breeching round with the shotgun and the reader will see the reason why real soldiers and SWAT cops carry a shotgun with them, because nothing else will do the job!
Posted by The Editor at 11:22 PM