In our last couple of posts, we studied the topic of suppressors (a.k.a. silencers). In this post, we will study a related family of devices, the flash suppressor a.k.a flash hider. In our study of silencers, the main purpose of those is to reduce the sound level of the firearm to make it more comfortable for the user to use it. As was noted previously, many silencers also reduce the amount of flash coming out of the weapon as well.

A flash suppressor (a.k.a) flash hider is not designed to remove any sound from the firearm. Instead, its sole purpose is to reduce the flash from the muzzle. So what is muzzle flash and why do we need to get rid of it. Basically, when a firearm is fired, the cartridge propellant burns inside the barrel and pushes the bullet out. If the barrel is a little too short or if the quantity of propellant is a bit too much, some of the propellant particles end up burning outside the barrel and thereby creating a huge fireball in front of the gun. The sudden bright flash may cause the user to be temporarily blinded, especially during night time. This was not so much a problem in previous centuries, when firearms had really long barrels and propellants had plenty of time to burn completely inside the barrel. With newer powders and modern assault rifles having much shorter barrels than previous firearms, it became much more of a common occurrence. Carbines also experience this problem due to having shorter barrels than normal rifles.

A flash suppressor works in a couple of ways. First, it can redirect the exiting gases to exit via the sides of the barrel instead of in all directions, thereby keeping the shooter's vision at the top of the barrel unaffected. Second, it allows the exiting gases to expand rapidly, which cools them off and reduces their temperature, which also reduces or eliminates the brightness of the flash.

The earliest type of flash suppressor came out around World War II and is called the cone suppressor or cone flash hider. This was introduced with the Lee Enfield carbine model V. They may still be seen these days on some AK models.

A cone flash suppressor which is normally used with AKs 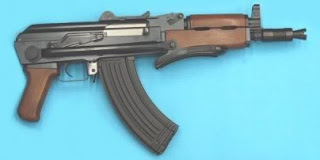 An AK weapon with attached cone flash hider
In the above pictures, we see a shortened AKS-74 with a cone style flash hider. It is a screw on type, which may be attached to the end of an appropriately threaded barrel. Note the hole on top in the first picture. When screwed on, this hole serves to redirect some gases up and acts as a brake to reduce the muzzle climb as well.

The next type of flash hider we will study is the duckbill type, which was often seen on early M16 models used in Vietnam. This consists of a device with a number of prongs on it, such as the image below:

As can be seen by the image above, the flattened prongs tend to resemble the bill (beak) of a duck, which gives this device its name. The prongs serve to redirect the gases to the sides, but not to the top of the barrel, so any flash that is generated will not go in that direction. While these were more effective than the earlier cone models, the prongs tended to get fouled up with vegetation when fighting in the jungle. The prongs also have a chance of getting bent on the open end, due to rough usage in the field. This doesn't mean that open-type flash hiders like this are obsolete. Some modern weapons, such as the Heckler & Koch G36 series still use them.

Birdcage type flash suppressor.
The ring in front supports the prongs and also prevents branches, grass and other vegetation from easily entering into the prongs. This type of flash suppressor came standard with the M16 A2 model. Also, in the M16A2, the flash suppressor not only prevents gas escaping from the top, the bottom is closed off as well. This prevents the hot gases from kicking up sand and dust when the shooter is firing from the prone position. This type is seen on many weapons today , including AKs, SIG, M16 etc.
Posted by The Editor at 12:08 AM