In the last couple of posts, we studied the basics of firearm safety mechanisms as well as some manual safety mechanisms. In this post, we will study a particular type of safety mechanism called the Grip Safety. This is a popular mechanism that was first seen on the classic John Browning designed Colt M1911 pistol and later seen on other pistol models as well. It is also found in the Israeli Uzi submachine gun. 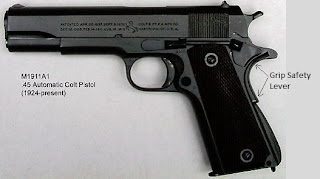 Public domain image. Click on image to enlarge.
The above image shows a Colt M1911A1 pistol. The grip safety lever is at the back of the hand grip and is automatically depressed when the user holds the pistol. There is also a manual safety lever on the firearm, at the rear of the slide, which you ought to be able to spot easily, if you've read the previous post.

Believe it or not, the original John Browning design didn't actually have a safety device, but the US Army insisted on adding a grip safety and a manual safety for the original M1911 pistol design, before they would accept it.  Hence, John Browning added them for the M1911, which stayed in service from 1911-1924. The changes made to the M1911A1 model (which has been manufactured from 1924 to the present day) were relatively minor: Longer grip, wider front sight, shorter spur on the hammer etc., so it still has a grip safety and manual safety. 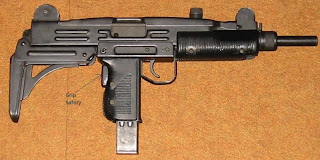 Public domain image. Click on image to enlarge.
The firearm depicted above is the Israeli made Uzi submachine gun. The grip safety is labelled in the above image and is pretty easy to see.