In this post, we will look into a special form of sights, the Night Vision Device. These allow the user to operate in darkness and low light conditions.

The origin of night vision devices traces back to a bit before World War II broke out. The American RCA company and the German company AEG Telefunken were the pioneers in this field in the mid-1930s. The first generation of these devices (often referred to as "Generation-0") were of the "active" type. What this means is that these devices work by projecting infrared light upon a target and then making an image intensifier that is sensitive to light at these frequencies. The image intensifier uses a vacuum tube to accelerate electrons reflected from the IR beam on the target, between the anode and photo cathode of the tube. The accelerated energy charge strikes a phosphor screen (like a TV screen) where the image is focused and can be viewed via an eyepiece. Since human beings cannot see infrared light, they are unaware that they are being targeted in the dark. The first such devices were designed to be used by snipers. Many of these Gen-0 devices had pretty abysmal sensitivity and were sometimes worse than an unaided human eye. Another major problem with these devices was that the enemy troops could also wear night vision goggles and immediately detect where the sniper was hiding. The image intensifiers used vacuum tube technology and therefore, used large amounts of electricity. The use of vacuum tubes also distorted the returned images quite a lot. Vacuum tubes also had a shorter life and would often stop working in the field. The infrared illuminators were also pretty massive and often had to be mounted to a flat-bed truck. Despite these disadvantages, Gen-0 devices saw use in World War II and the Korean conflict.

The next generation devices ("Gen-1") saw action during the Vietnam War in the 1960s. Unlike Gen-0 devices, these were designed to be "passive" type devices (i.e.) they do not require their own source of infrared light and can work under moonlight conditions. 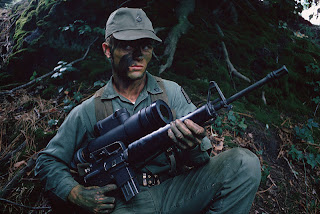 Generation 1 Night Vision Device AN/PVS-2 mounted on M16 assault rifle. Click on image to enlarge. Public domain image.
In the above image, we see a typical Generation 1 device from the Vietnam war era, mounted on top of an M16 A1 rifle. The device in question in an AN/PVS-2 Starlight scope. The device is still pretty bulky, but it doesn't need a separate IR projector. The image intensifier technology still used vacuum tube technology and still had image distortion problems. To improve the gain on these devices, multiple vacuum tubes were often cascaded together, making the image amplification to the order of 1000x to 2000x and having a service life of around 2000 hours. Despite that, these devices only worked well during full moon conditions and could not be used in anything less than half-moon conditions, which means they were pretty much useless during half the month and also on cloudy nights.

The next generation of devices ("Generation 2") came out in the 1970s. Due to major improvements in tube technology, Generation 2 devices offer much less distortion of the image and more reliability than Generation 1 devices. Gen-2 devices use microchannel plates instead of cascading vacuum tubes in the image intensifier. This makes them much more sensitive to IR light than Gen-1 devices and they can be used effectively even on moonless nights and in fog and cloudy conditions. The use of microchannel plates means that the viewed image often has a distinct square or hexagonal pattern on it.  Compared to Gen-1 devices, these typically offer up to 20,000x to 30,000x amplification and last about 2500 to 4000 hours. Examples of such devices include the AN/PVS-4 and AN/PVS-5. 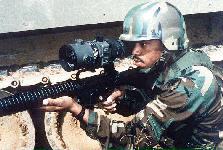 A soldier using an AN/PVS-4 night vision device.
Gen-2 was followed by an improved Gen-2+, which offers better performance during high and low light levels. In fact, Gen-2 devices may still be found on sale in the market today.

The next generation (Generation-3) of devices has no change in the basic technology of Generation 2 devices, but the components themselves have improved, thereby contributing to better resolution and longer life. For one thing, the photo cathode uses Gallium Arsenide (GaAs), which makes it much more efficient than the older technologies. The microchannel plate is also coated with an ion barrier film, thereby increasing the life of the device. Gen-3 devices offer 30,000x to 50,000x amplification and  last about 10,000 hours or so. The first Gen-3 device was the AN/PVS-7 which was originally fielded in limited numbers in 1988 to military personnel in Fort Hood. This was followed by AN/PVS-10 and AN/PVS-14 in the 1990s and Gen-3 devices are still in use with the US military. In fact, they saw widespread use in Operation Desert Storm in the 1990s, where they certainly proved their worth.

During all this time, night vision devices were mainly used by military forces because of high prices and lack of accessibility in the civilian market. That all changed during the early 1990s, due to the collapse of the former Soviet Union. A number of Gen-0 and Gen-1 devices from Soviet military surplus became available in the western civilian market and caused an overall drop in the prices of night vision devices and they became much more accessible to civilians as well. These days, one may find Gen 2, Gen 2+ and Gen 3 devices available for sale to civilians.

Generation-4 devices are currently under development. Among the planned improvements is an automatic gated power system, which allows quick switching on and off of the photo cathode. This allows the user to move from a well lit to a dark environment or vice-versa easily.

One question that puzzles many people is why does the image of a night vision device show up in green? There is actually a very good reason for this. Apparently, the phosphor screen is deliberately coated green because it turns out that the human eye can distinguish between more shades of green than any other color.
Posted by The Editor at 12:16 AM