In our last post, we looked at Grip Safety Devices. In this post, we will look at something similar, the Integrated Trigger Safety device. This device really became popular because of Glock pistols, and other manufacturers such as Springfield Armory and Smith & Wesson also offer some models with this feature. 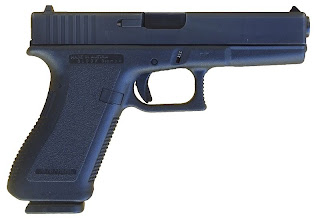 Public domain image. Click on image to enlarge.
The above image shows a typical Glock 17 Generation 2 pistol. If you were to click on the image to enlarge it, pay attention to the trigger assembly and notice that it seems a little thicker towards the bottom. That is because the trigger has a small spring loaded lever embedded into the lower half of the trigger. This is the integrated trigger safety device.

Similar to the grip safety, this spring loaded lever is automatically depressed by the user as a natural consequence of the user's actions, in this case, pulling the trigger. When the lever is depressed, it unlocks the main trigger and allows it to move. One cannot move the main trigger without depressing the small lever fully.

Therefore, if the user were to drop the pistol accidentally, the safety devices would automatically activate and hopefully prevent the firearm from discharging. This design found widespread popularity among many users, who prefer not to move any manual lever or button to activate and deactivate the safety. The firearm still goes bang when the user pulls the trigger, but not if it were to be accidentally dropped.

Since Glock pistols became very popular, some other manufacturers took notice and used a similar feature in some of their products.
Posted by The Editor at 12:44 AM