In a Failure to Eject type malfunction, the old cartridge shell is properly extracted from the chamber after it is fired, but due to some reason, it doesn't get ejected out of the ejection port and stays in the gun partly. Because of this, the slide cannot close and the gun gets jammed. We've actually already studied one type of Failure to Eject last month: The Stovepipe Jam. 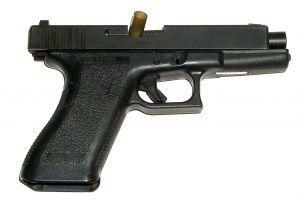 A pistol jammed by a stove pipe jam (A Failure to Eject type malfunction).
Click on the image to enlarge.

As can be seen in the picture above, the empty cartridge case was not fully ejected out of the firearm and got caught in the slide, thus preventing it from closing fully and therefore leaving the pistol jammed.

As far as the reasons why this happens, the big reasons are:

Remedying this problem in the field is fairly easy as the stuck empty cartridge is usually easy to remove without using any tools. The primary cause of this problem in handguns is because of limp-wristing. However, if the problem continues to happen, then the extractor, ejection spring or return spring (or more than one of the above) may need to be replaced.