Grenade launchers generally tend to have shorter barrels and lower barrel pressures, so it is possible to eliminate the butt stock of a shoulder fired grenade launcher and attach the rest of the parts to the underside of a rifle barrel.

In the image above, we have a M203 grenade launcher attached underneath the barrel of an M4 assault rifle. Note that the grenade launcher has its own trigger which is located in front of the M4's magazine. It also has its own adjustable leaf sight, which is the long thin rod in front of the telescopic sight. The leaf sight is used in conjunction with the M4's front sight to launch grenades. 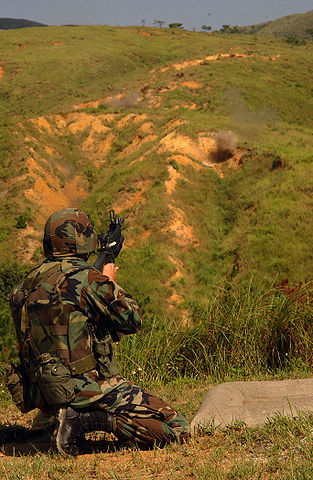 Public domain image of a US soldier using a M203 under barrel grenade launcher attached to the underneath of a M16 assault rifle.
Note how the soldier is using the leaf sight along with the M16's front sight to aim the launcher.

To launch the grenade, the user typically shifts their hand that is on the rifle's pistol grip to the magazine and then pulls the grenade launcher's trigger. To go back to shooting the rifle, the user simply moves his/her hand back to the pistol grip.

Models such as the US made M203, the German AG36 and the Russian GP-25 and GP-30 are some common under barrel grenade launchers used around the world.