During the Vietnam war era, the US military developed a dedicated shoulder fired grenade launcher called the M79 for use by troops. The plan was to design a weapon to increase the firepower of troops, while having more accuracy than a rifle grenade, but lighter than a mortar. As a result of this research, the M79 grenade launcher was developed.

It is a simple design that resembles a break-open action shotgun. The front sight at the very end of the muzzle is a fixed type and the rear sight (which is mounted midway on the barrel) is a folding leaf sight.

Even though the original requirement was for a multi-shot launcher, the designers never got that to work reliably and the weapon is a single shot one. This means the user needs to manually load a new cartridge after each shot. This weapon has a range of 75 to 375 meters and can fire a variety of grenade types. It was delivered to the US army in 1961 and quickly became popular among the soldiers, due to its reliability and simplicity. They called it by various names, "Blooper", "Thumper", "Thump-tube" (all due to the sound that it made), "Wombat" (this was its Australian nickname) were all common names. The downside of it was that it was a single-shot weapon and could not shoot rapidly. It also had the problem of being a dedicated device, so the soldier carrying one would only have a small pistol to defend himself.

The South Africans developed a multi-shot dedicated grenade launcher called the MGL. This was developed during 1980-1981 and adopted by their military in 1983. Soon after, it was adopted by other military forces around the world. In US military service, it is called the M32. 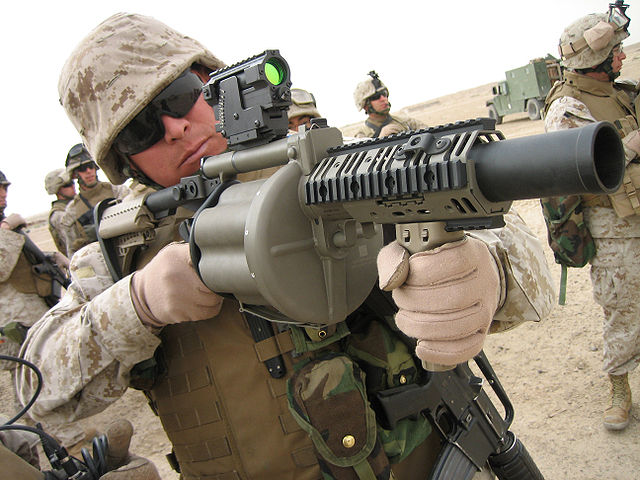 It consists of a six shot cylindrical magazine that resembles a revolver magazine. One major difference though is that the magazine is driven by a spring, so it must be wound back up after reloading. This fires a variety of grenades, just like the M79 does. In fact, one variant is the same caliber as the M79.

In the next post, we will look at some other types of launchers as well.