A grenade is a weapon with a long history and in recent years, it has been combined with firearms to produce rifle-launched grenades, under barrel launchers etc. We will study how this came to be in the next series of posts.

The word "grenade" is based on the French word for the pomegranate fruit, as some early grenades used to have the same basic shape as the fruit and the shrapnel inside resembled the seeds of a pomegranate.

It may come as a surprise to some to discover that grenades were in use before the invention of gunpowder! The very first grenades were clay pots that were filled with incendiary material such as petroleum and Greek fire (the method and ingredients for making Greek fire were closely guarded state secrets and the formula has now been forgotten, but we know from ancient historical documents that it was a very flammable liquid and could continue to burn on top of water.) These grenades first appeared on the scene in the Eastern Roman empire (i.e. Byzantine empire) around 740 AD or so. Later on, glass containers were also used instead of clay pots. 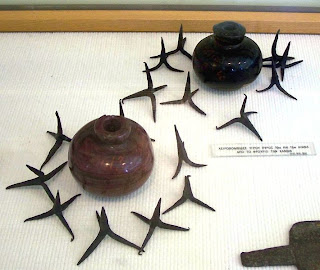 People would fill containers like these with petroleum or Greek fire, seal the hole on top and then tie a burning rag and throw them. Upon hitting a hard surface, the container would shatter and spill its contents around an area and the contents would then ignite from the flame on the burning rag, thereby causing havoc over a small area. This idea later spread to Muslim areas during the crusades and from there on, it worked its way into China by the 10th century AD.

Meanwhile, the Chinese had also discovered gunpowder at around the same time and soon after, they began packing it into their grenades. A military manual called Wujing Zongyao ("A Compilation of Military Classics") written in 1044 AD describes a gunpowder recipe to be used with a grenade. About three hundred years later, the Chinese began to make their grenade shells out of cast iron rather than clay or glass for greater effect. This was mentioned in the Chinese Song dynasty era book Huolongjing ("Fire Dragon Manual") written in the 14th century, which describes various gunpowder based weapons in use in China during that period. One of the formulas that the author recommends is a mixture of tung oil, urine, sal ammoniac, feces and scallion juice to be heated and then coated upon tiny iron pellets and bits of broken porcelain. The pellets are then put in a cast-iron container loaded with gunpowder and then launched either by hand or catapult. Anyone unlucky enough to be hit by this shrapnel would die slowly from blood poisoning, if they were not killed outright.

The cast-iron and gunpowder design slowly started to move back westwards from China to Europe and in the 17th century, European countries were using cast-iron gunpowder based grenades as well. The word "grenade" to describe the weapon was first recorded in use in 1688 during the Glorious Revolution, though it is possible that they were in use in Europe some decades before in Austria and Spain.

As the Europeans began to use the grenade, they also developed specialized troops trained to use these weapons. Such troops were called "Grenadiers" and the first official grenadiers were in the army of King Louis XIV of France. 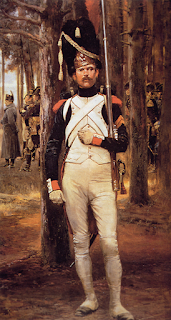 Since a grenade lays damage about a large area, it was necessary for a grenadier to be able to throw it far away as possible in the direction of the enemy and away from one's own troops. This meant that the grenadier had to be a person who was taller and stronger than average. A grenadier also had to be brave and disciplined enough to stand up in the front of the line, light the fuse of his grenade, wait for the fuse to burn down and then throw it at an appropriate time so that the enemy could not throw it back. Only the largest and strongest soldiers were chosen as grenadiers and they were given more training than the average soldier. The grenadiers were therefore regarded as the elite assault troops of their era and had higher pay and wore special uniforms to show their status.

By the 19th century, the use of grenadiers to throw grenades had become less useful, but such large imposing soldiers were also used to lead dangerous assaults on the battlefield.

The revival of grenades in warfare and using firearms to launch them (so that weak people could also launch them for a longer distance easily) began with the Japanese in 1904, but that is a subject for the next chapter, where we will study how firearms and grenades started to become integrated.
Posted by The Editor at 10:53 PM