Ancient Techniques of Rifling Machines - I

In the last few posts, we studied some videos of rifling techniques and we had also studied the descriptions of these techniques in detail many months earlier. The thing to note though is that all these videos showed relatively modern machinery making the rifling. In fact, the oldest machine in those videos dates to some time in the early 1900s. However, as we have seen earlier, the history of rifling dates back to about 1520, well before such automated rifling machines were invented. So how did people historically cut rifling grooves into their barrels, without the aid of modern machinery? We will attempt to reconstruct their techniques in the next series of posts, only using technologies that would have existed in the 1500s and 1600s. As we are studying the techniques, it will become fairly obvious to the reader, that historical gunsmiths would have had some pretty good skills in both woodworking and metalworking, which is why they formed separate gunsmithing guilds, which were different from carpentry and blacksmith guilds.

The first tool that any gunsmith would have used would have been a lathe. This handy tool was known to the ancient Egyptians in 300 BC and later spread to the Greeks, Indians, Chinese, Assyrians, Romans etc. The first design simply had one person alternately pulling on two ends of a rope looped around a wooden work piece, to rotate the work piece around two centers, and the other person would apply a sharp edged tool to the rotating wooden piece, to cut it into a cylinder or a tapered cylinder or a similar shape.

The following image can be found in a bas-relief carving at the tomb of Petosiris, a high priest who lived in Hermopolis, Egypt, dated to about 300 BC. 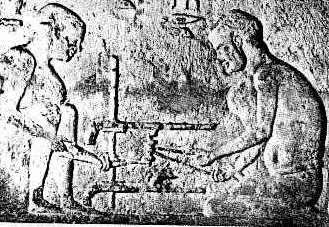 Two images of lathes, as used in ancient Egypt

The basic two-person operated lathe concept was modified by other cultures, as shown in the example from India below: 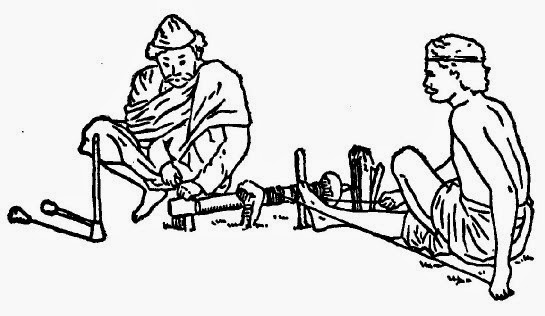 The Romans came up with a lathe design that used a bow to turn the wooden work-piece. With this type of lathe, there is no need for a second person, as a single person can move the bow with one hand and manipulate the cutting tool with the other hand. However, there is lesser power applied, since the person is turning the work piece with only one arm and hence it is suitable for smaller jobs only.

The bow lathe design stayed with us for quite a long time: small bow lathes were still used by clockmakers in the early 1800s.

In the middle ages, someone got the idea of tying one end of the rope to a thin springy pole or branch and the other end to a foot pedal and the rope would loop around the wooden work piece to be turned. The craftsman would use his foot to operate the pedal and use his two hands to hold various tools against the turning wood piece. 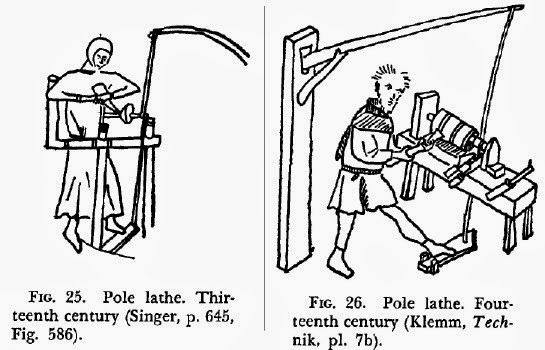 Other lathe designs included using horses, flowing water, steam and electricity to power them and lathes evolved to cut both wood and metal pieces.