In our last post, we studied a very unusual firearm, the Girandoni Repeating Rifle, which did not use any gunpowder, but was entirely powered by air pressure. In today's post, we will study a very unusual revolver design, the Enouy Revolver. One look at it is sufficient for the reader to judge how unusual this is: 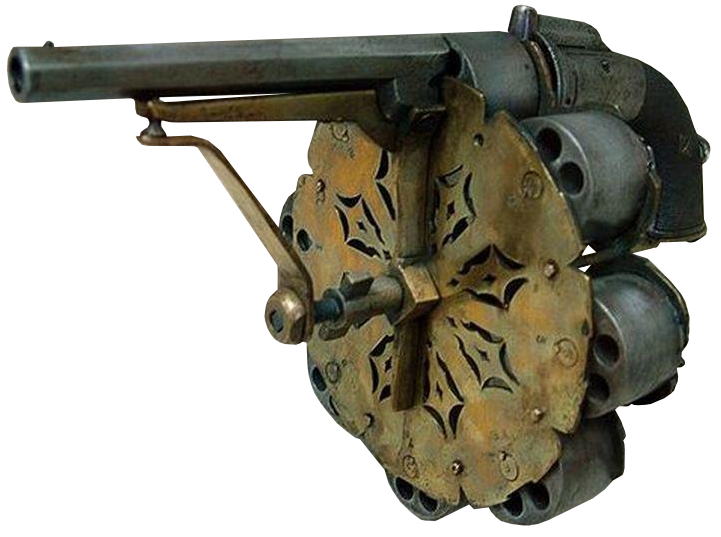 The Enouy revolver was a design patented by Joseph Enouy of Middlesex, England, who received British patent #1359 in 1855. The basic revolver was based on a transitional revolver design made by Charles Osborne in 1845. The innovative part of Enouy's design was the compound magazine design. According to the notes for his patent application:

Patent 1359. Joseph Enouy, of 31, Denbigh-place, Pimlico, St. George's, Hanover Square, Middlesex, for The means of removal of every rotary or revolving barrel or cylinder containing chambers from all revolver pistols, guns, and fire-arms, and the substitution in their place by another and other barrels or cylinders in succession.

Two or more revolving breech-pieces are connected in a frame attached to the stock in such a manner that when the charges in the chambers of one breech-piece have all been fired, the breech-piece may then be removed and others ready charged by successively substituted in its place.
- Dated June 14, 1855. Sealed December 11, 1855.

In this particular example, each revolver cylinder is capable of holding 6 shots and there are 8 different revolver cylinders attached to the compound magazine wheel, thereby giving this weapon a capacity of 48 shots. Here's another view of the same firearm: 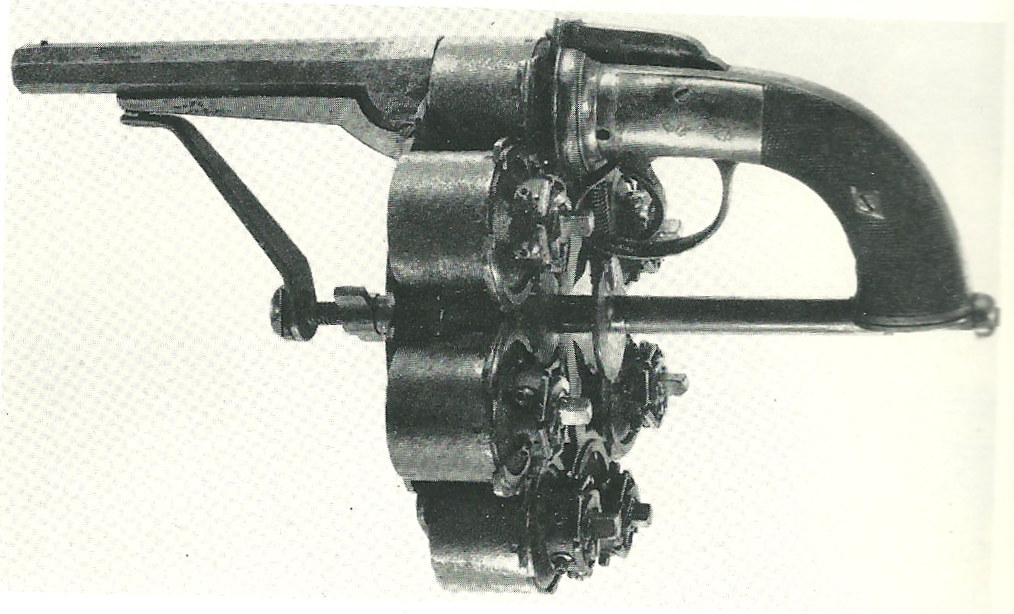 The magazine wheel rotates around a rod, which is fastened to the revolver butt on one end and to a bracket that is attached to the underside of the revolver on the other end.

As you may have guessed, this weapon is very heavy, unbalanced and unwieldy at the same time. Due to the magazine wheel in front, the user can't carry this revolver is his pocket or in a holster either. This firearm design was not a success and Joseph Enouy didn't seem to manufacture many of them either. In fact, most of the pictures of this firearm available on the web are from one particular revolver made by Enouy, which was once owned by a Mr. Vokes. As there are no records of this revolver being manufactured and sold commercially, it is possible that the above example is literally the only one that was ever made. It is fortunate that we have a record of Mr. Enouy's patent application available.