In today's post, we will study a particular class of firearm that was very uniquely American and popular from the end of the Civil War to the beginning of World War I. We are going to study about Pocket Rifles, otherwise called Bicycle Rifles.

The origin on these weapons has to do with the Stevens Arms and Tools Company, founded by Joshua Stevens. He was a well-respected toolmaker, who had worked for Colt, Eli Whitney, Smith & Wesson, Allen and many other American gunmakers of the era, before founding his own firearms company in 1864. The company's first two models were a Pocket Pistol and a Vest Pocket Pistol (a year ahead of Remington's Vest Pocket Pistol model). In 1869, the company produced what it called a "Pocket Rifle". This was largely based on their Pocket Pistol model, except that it had a longer barrel, better sights and a cap on the pistol's grip to accept a detachable shoulder stock made of wire. Like the Pocket Pistol, the Pocket Rifle was also a single shot model.

In 1872, a larger 'New Model Pocket Rifle' was added to handle cartridges up to .32 caliber rimfire cartridge. Shortly after that, a line called the 'Hunters Pet Pocket Rifle' was also introduced that went up to .44 caliber. The shoulder stock was also modified so that it slid into a dovetail cut into the butt of the pistol and a screw on the backstrap. 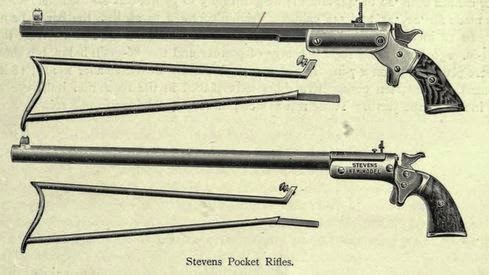 The second issue model mounted the firing pin in the frame rather than the hammer, as a safety feature. In 1887, a version that fired the .22 Long Rifle (also known as .22 LR) rimfire cartridge was manufactured for the first time. The .22 LR cartridge was also invented by the Stevens Arms and Tools Company and is still the most popular cartridge in the world today (almost every major firearm manufacturer in the world has made at least one product that fires .22 LR).

In the 1880s, advertisements for these guns started to refer to them as "Bicycle Rifles", probably as a marketing tactic to sell them to cyclists of that era, as a light rifle that could be carried for self defense. 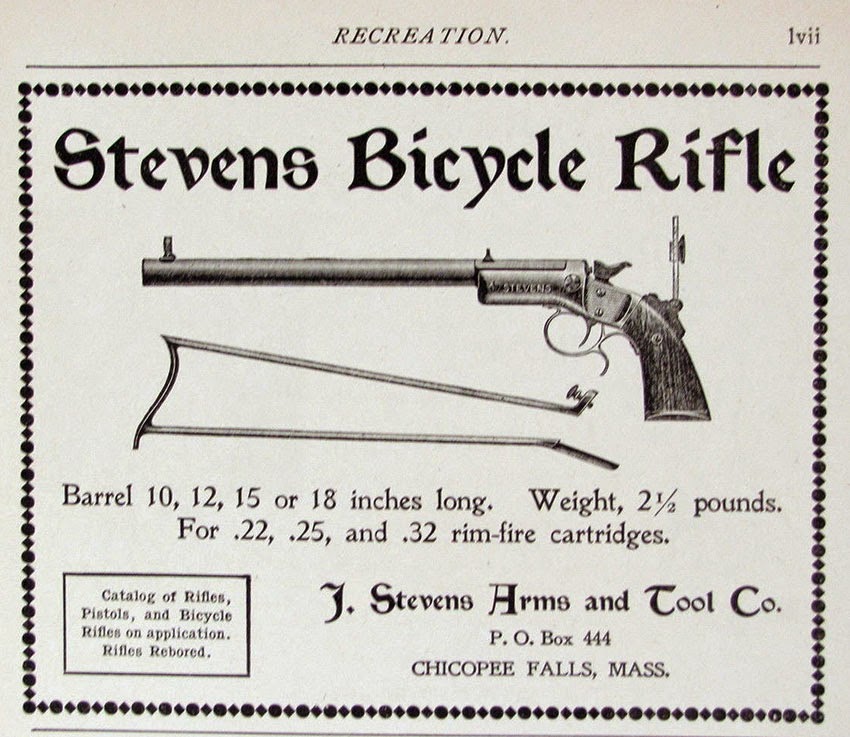 An advertisement for a Stevens Bicycle Rifle. Click on the image to enlarge.

They were also offered with carrying cases made of leather or canvas and marketed to hunters as a secondary light rifle, and to fishermen to carry with their fishing equipment.

The nice thing about these compact rifles was that they offered much more range and accuracy than pistols, but were much cheaper than other single shot rifles of that era, while also being much more portable than other rifle models. One Mr. A.C. Gould reported that using a model firing .22 caliber cartridges with an 18 inch barrel, ten shots were placed into a target of 8 inches diameter at 200 yards distance.

After the success of the initial models, other manufacturers also started to make pocket rifles, but Stevens continued to dominate the market until the last model was manufactured during World War I. It must be noted that practically all dealer catalogs of that period that advertised pocket rifles. invariably showed the Stevens brand name. Some larger dealers offered pocket rifles under their own brand, but many of these were actually manufactured by Stevens and marked with the dealer's brand name.

While pocket rifles sold very well in America, they remained a very American invention and never really spread to other countries. While they were light and relatively portable, they were all single-shot models. Their popularity began to decline after semi-automatic and fully-automatic weapons became more common.