In our last post, we studied some parts of a factory designed to produce rifle barrel blanks. In today's post, we will continue studying the process. As noted before, some of the details come from a book, "The Working of Steel" by Fred Colvin and K.A. Juthe, and in addition, K.A. Juthe was the designer of the factory as well.

The Brinell hardness test was invented by Swedish engineer Johan Brinell in 1900. It was one of the first standardized hardness tests used in engineering and is still used today. The test is very simple. It uses a steel or tungsten carbide ball of diameter 10 mm. (0.39 inches), which is used as an indenter. The ball is placed on the surface of the object to be tested and a 3000 kg. (or 6600 lbf.) test force is applied to the ball for a specific time (normally 10 to 15 seconds). After this, the ball is removed and it leaves a round indentation on the surface of the object. The diameter of this indentation is measured and the Brinell Hardness Number (BHN) is calculated, based upon the diameter of the ball, diameter of the indentation and the force applied to the ball. For softer materials, such as aluminum, a smaller test force (e.g. 500 kg. (or 1100 lbf.) is used instead.

The above image shows a line drawing of the concept and the formula actually used to calculate the Brinell Hardness Number (HB in the image above).

Returning back to our study of the factory process, the barrel blanks were tested for hardness to make sure that they had a Brinell Hardness Number (BHN) of at least 240. 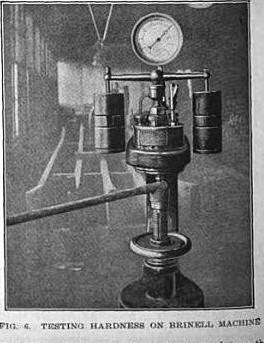 At this point, the barrel blanks were shipped off to a barrel manufacturer, who would then drill, ream, finish-turn and rifle the blanks into complete barrels.

Now. all through the description of the process so far, we've been talking about heating the blanks for various purposes. We will cover the heat treatments in detail here. There were actually four separate heat treatments done to the blanks.


We will study each of the four heating processes in detail.

For the first heating process, the blanks were slowly brought up to the required heat, which is about 150 degrees Fahrenheit (65.5 degrees centigrade) above the critical temperature of the steel. The blanks were then soaked at a high heat for about one hour before quenching in oil. The purpose of this treatment was to eliminate any strains already existing in the bars that may have been put there from milling operations done to the bars. Remember that steel is an elastic substance and working it puts stress on the bars. For instance, during the production of steel, the manufacturer rolls the bars through various rollers to make them the required diameter, which causes the bars to come out stressed. The heat treatment process removed the stress caused by rolling, hammering, cutting etc. It also ensured that the heat treatment applied to the entire cross-section of the bar and not just the surface. In addition, if a blank had seams or slight flaws, these opened up drastically during the quenching process and made it easy to determine if a blank was defective or not.

The oil used for quenching was kept at a temperature of  around 100 degrees fahrenheit (38 degrees centigrade). This is an ideal temperature is to prevent shock to the steel when it is dropped into the quenching oil, otherwise it could develop surface cracks on the piece.

The second heating process (the one for drawing the temper of the steel) was a very critical operation and had to be done carefully. The steel had to be kept heated within 10 degrees of temperature fluctuation in the process. The degree of heat necessary for this operation depended entirely on analyzing the steel. Even if the steel was purchased from the same manufacturer, there was always some variation in different batches received from the manufacturer.

For both the second and third heating process, after the heating was done. the blanks were buried in lime so that they would be out of contact with air, until their temperature had dropped down to room temperature.

Another method was later found to produce an even better barrel blank. The blanks were first rough-turned to the final barrel diameter and then heated to about 1000 degrees Fahrenheit (538 degrees centigrade) for about 4 hours before sending them to the barrel manufacturer. Blanks produced with this method remained practically straight during the different barrel making operations (drilling, reaming, finish-turning and rifling). This meant that the barrel manufacturers didn't need to straighten barrels after they were finished (which was a much more expensive operation). This method was tested out with one of the largest barrel manufacturers in the US and it proved to be very effective.

As the reader might be wondering, all this heat-treating needed a large amount of oil for cooling and one of the problems was how to keep all this oil at the proper temperature. After much study, a cooling system was developed for the factory. The next two images show the cooling system as seen on the roof from the outside of the factory. 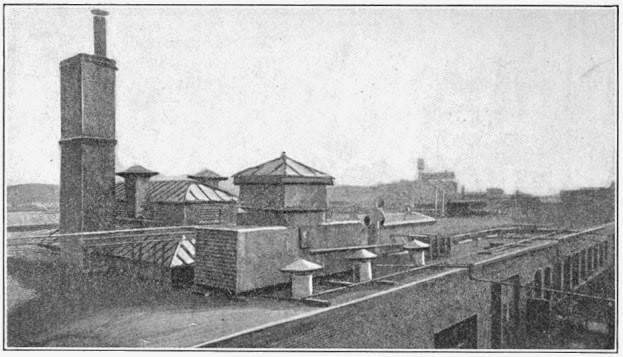 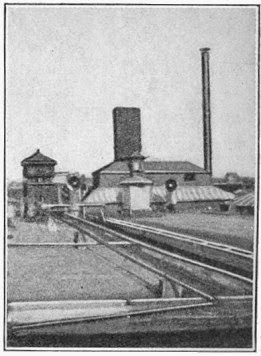 
The next image shows the details of the cooling system: 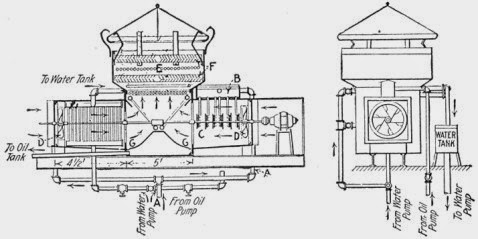 The hot oil is pumped up from the quenching tanks through the pipe A into the tank B, From here, the oil runs down onto the separators C, which break the oil up into fine particles, that are blown upwards by the fans D. The spray of oil particles is blown up into the cooling tower E, which contains banks of cooling pipes and baffles F. Cold water is pumped through the inside of the pipes. The spray of oil particles collects on the outside of the cold pipes and forms larger drops, which fall downwards onto the curved plates G and then run back to the oil-storage tank below ground. The water pumped through the cooling pipes comes from 10 natural artesian wells at a rate of 60 gallons per minute and this serves to cool about 90 gallons of oil per minute, lowering it from a temperature of about 130-140 degrees Fahrenheit to about 100 degrees Fahrenheit. The water comes out of the wells at an average temperature of 52 degrees Fahrenheit. The pump is driven by a 7.5 HP motor and the speed can be varied to suit the amount of oil to be cooled. The plant was designed to handle up to 300 gallons of oil per minute.

The finished blanks from this factory were sent to different barrel manufacturers to drill, ream, rifle etc. to their requirements.