What's the deal with Barrel Shrouds?

So what is a barrel shroud? It is simply a hollow covering tube that surrounds a barrel (either partially or fully). What does it do? Well, it protects the user of the firearm from accidentally burning himself or herself with the hot barrel.

A barrel shroud typically has many holes throughout its length. The holes serve to reduce its weight and also dissipate heat by venting out hot air. The next picture shows a barrel shroud attached to a firearm. 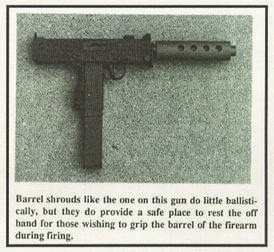 The curious reader is probably thinking now, "isn't that what the stock of a firearm is designed to do?", Yes, the stock and the receiver do protect the user's hands as well, but they are not considered as barrel shrouds, because they serve other purposes as well, whereas the barrel shroud is a separate component that is screwed on around the barrel and explicitly designed to protect the user's hands (or other body parts) from heat.

Barrel shrouds are generally commonly seen with air-cooled machine guns, but they are also optional components for many semi-automatic models. Some shotguns also feature barrel shrouds. There are many third party component makers that make barrel shrouds for various rifle and shotgun models. In general, they are useful to have with weapons that fire rapidly, because the barrel can heat up quite a bit after a few shots in rapid succession.

If a barrel shroud is simply a covering tube to protect a user from touching a hotter part of the gun, then what's the big deal about them? Well, for a while, barrel shrouds were targets of legislative restrictions in the United States. The now expired Federal Assault Weapons Ban explicitly included barrel shrouds in its list of features for which a semi-automatic firearm could be banned (if a firearm had two features in the list, it could be banned under this law). After the law expired, proposals were made to renew the ban, including this provision, but have not been successful so far.

Amusingly, during an interview on MSNBC in 2007, Representative Carolyn McCarthy was asked about her gun control legislation and why it prohibited people from purchasing firearms that have barrel shrouds and if she even knew what a barrel shroud was. After attempting to avoid the questions twice, she finally admitted, "I don't know what it is, I think it is a shoulder thing that goes up!"


It is amazing that she was trying to introduce a law to ban something without even knowing what it was!