Manufacturing Cartridges in the 19th Century

In today's post, we will look at how brass centerfire cartridges were manufactured in the 19th and early 20th centuries. The process we will look at was what was used at Kynoch, a large British manufacturer of ammunition. The brand name "Kynoch" is still used today to sell cartridges, even though they have been merged into a larger company.

The Kynoch factory during this time period, was located in Witton, an inner city area of Birmingham, England.  The factory had several hundreds of machines in a single building, turning out cartridges of many shapes and sizes. The machinery used there can be considered as the latest technology for that era.

The process we will study today is what was used to manufacture solid-drawn brass cartridge cases. The first step in the process is to make flat sheets of a type of brass called "cartridge brass". The brass sheet metal is then taken to a machine that punches out circular blanks from the sheet. 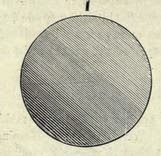 The image above shows a blank to be used to manufacture cartridges for a Mauser rifle. The next step is to put the blank through a drawing machine, where it is forced through a die with a tapering aperture by a ram under high pressure. This produces an object that is shaped somewhat like a cup or a thimble, as shown below:

Naturally, the pressure applied when shaping the cups puts stress on the metal. Therefore, the cups are then annealed. Annealing is a process of heating the object until it is glowing hot and maintaining the temperature for a while and then rapidly cooling it by quenching in water (a previous version of this post incorrectly mentioned "letting it cool back slowly to room temperature in a room with no breeze blowing". Brass can be annealed by cooling rapidly with no ill effects. Steel, on the other hand, has to be annealed by letting it cool slowly. Cooling steel rapidly hardens it instead of softening it, whereas brass can be cooled rapidly.) The process of annealing softens the metal and removes the internal stresses caused by the shaping process. After annealing, the cups are then pickled in sulfuric acid to clean them. They are then forced through the drawing machine again to increase the length of the cartridge case (as shown in step 3 in the image below). The process of annealing, cleaning in acid and then forcing through the drawing machine is repeated multiple times, depending on the type of cartridge case, and the cartridge case is elongated each time until it reaches the size as shown in step 4 of the image below. 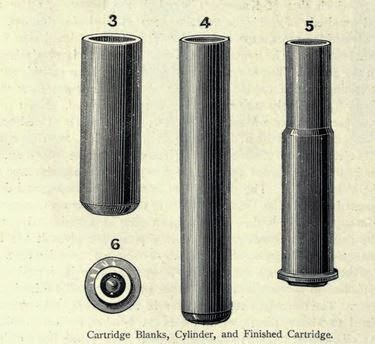 The cartridge cases are then trimmed to the required length and the rims are machined to remove sharp edges  and then, a primer cap is applied to the base of each case by a descending rammer and they are ready for loading. We will study exactly how this was done in the next post.

These days, many cartridge manufacturers use an extrusion process to form the cartridge cases, as it is faster and  more economical (we will study that shortly). However, there are a few manufacturers around, such as Norma, Lapua and RWS, that still use the traditional process to make premium quality brass cases.