Where we left off in our last post, the company formed by Horace Smith and Daniel Wesson was off to a bad start, as the lever action firearms that they made did not sell very well. Their chief financier, Courtlandt Palmer, had reorganized Smith & Wesson into the new Volcanic Army Company and managed to convince another group of investors (including Oliver Winchester) to buy their company. After this, Courtlandt Palmer got out of the firearms business completely, Horace Smith went back to his home in Springfield, Massachusetts, after selling his remaining shares in the company. Daniel Wesson stayed on as a factory manager at Volcanic Arms for 8 more months, before leaving as well. Benjamin Tyler Henry also left and went back to his old job at Robbins & Lawrence.

After this, Oliver Winchester moved the Volcanic factory to New Haven, Connecticut, where he already had a successful shirt manufacturing business. The Volcanic company nearly went bankrupt in 1857, due to poor sales. Oliver Winchester managed to acquire the remaining shares of the company and reorganized its assets under a new company called the New Haven Arms company. Meanwhile, he kept the patent rights of the Volcanic Arms company under his own name and licensed the rights to manufacture them to the New Haven Arms company. He also managed to convince 11 other investors to invest in this new company (7 of these investors owned shares in Volcanic as well), while retaining a controlling majority of shares.

In the beginning, sales were rather slow and the company was mainly kept running, due to personal funding by Oliver Winchester and his partner in the New Haven Shirt Manufacturing company, John M. Davies. Around April or May 1858, he managed to convince Benjamin Tyler Henry, who had gone back to Robbins & Lawrence, to rejoin and become the new factory superintendent. Henry had worked with Horace Smith and Daniel Wesson at various stages of development of the previous Jennings and Smith-Jennings rifles, so he was fully aware of the advantages and disadvantages of their products. He was convinced that while the lever-action principle was a good idea, the ammunition could be improved. Therefore, with the backing of Oliver Winchester, Henry set upon improving the metallic cartridge and initially produced a better cartridge in .38 caliber in 1859 and produced a few sample carbines and pistols using this cartridge. 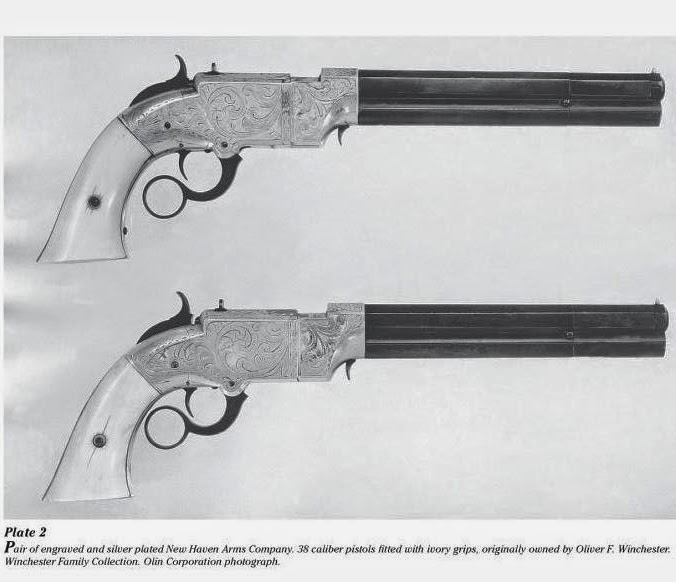 However, Oliver Winchester decided that .38 caliber firearms would probably not sell very well and wanted a bigger cartridge. He also recognized that the future of lever-action firearms lay with rifles rather than pistols and therefore directed the company to concentrate on rifle development. With Winchester's backing, Henry came up with a .44 caliber rimfire cartridge and a rifle to fire it, in 1860. 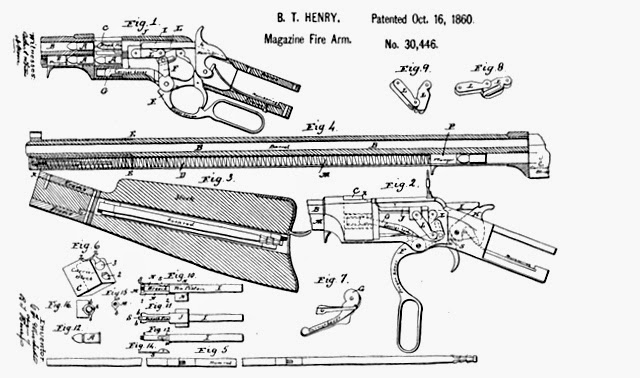 Due to Oliver Winchester and John Davies expanding their shirt manufacturing factory in the beginning of 1860, they could not fund the re-tooling of the New Haven Arms factory to immediately manufacture the Henry design. Instead, they settled on making 3000 Walch pocket revolvers in .31 caliber for the Walch Arms company owned by Cyrus Manville of New York. By April 1861, Winchester's finances had improved so that he could fund the re-tooling process and the company started to deliver the new Henry rifles by 1862. 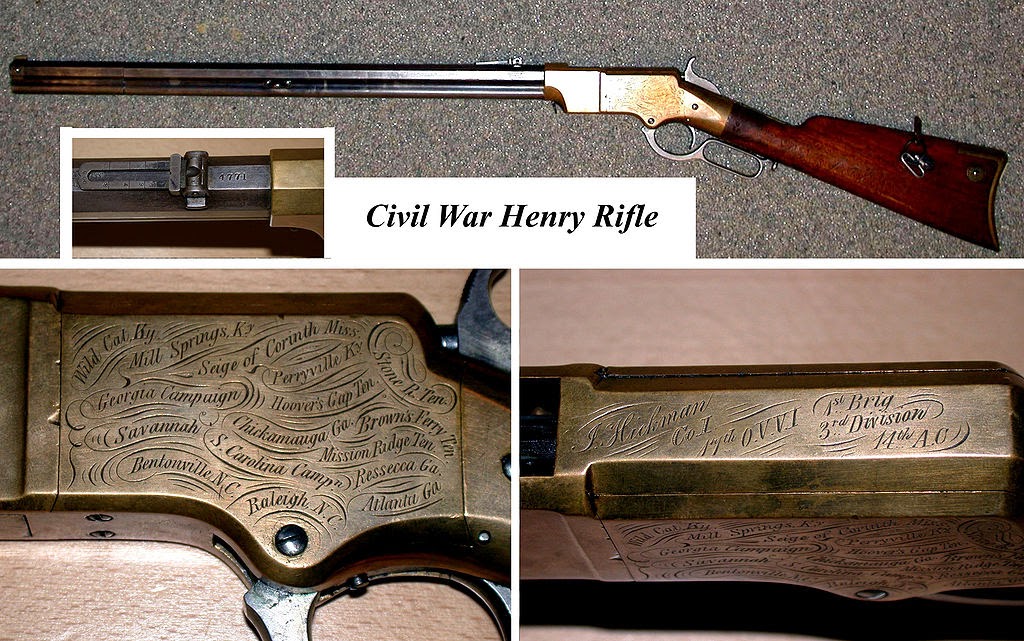 A Henry Rifle. Click on the image to enlarge.
Image licensed under the Creative Commons Attribution-Share Alike 3.0 Unported by Hmaag

Sales were initially slow, but then the Civil War started and demand for the Henry rifle increased. It is interesting to note that the US Government only purchased about 3140 Henry rifles before the war and 1731 Henry rifles during the war, but more of them were purchased by the soldiers privately, using their own money. The official repeating rifle of the US military was the Spencer rifle, which was also a repeating lever-action weapon and much more sturdy than the Henry rifle. However, despite the relative fragility of the Henry rifle and its lesser power than the Spencer rifle, it had two big advantages over the Spencer rifle:
Therefore, individual soldiers in the Union Army saved up to buy Henry rifles, using their own money and they purchased more rifles than the US Government did. To the Confederate soldiers who were armed with slow single shot muzzleloading rifles, a Union soldier armed with a fast firing 16-shot repeating rifle was a deadly opponent. In fact, confederate soldiers called the Henry rifle as "the damned Yankee rifle that they load on Sunday and shoot all week!"

The formation of this new company was not that hard, since it turned out one of New Haven Arms factories in Bridgeport was actually leased under Oliver Winchester's name and not the company. He had also paid to equip this factory personally, and not the New Haven Arms company. Therefore, he had a factory already equipped to manufacture firearms and could reduce the New Haven Arms company's production by over 50% immediately. On top of that, he owned many of the machinery used for production, therefore many of the other shareholders voted to keep him as president of the New Haven Arms company. Nevertheless, he formed Winchester and set about producing an improved version of the Henry rifle, which became the Winchester Model 1866. This used the same .44 caliber cartridge, but improved the magazine to prevent the jamming issues, by making a closed magazine that could be loaded via a hinged gate at the bottom of the receiver. The design was modified sufficiently to prevent Benjamin Henry and the Henry Arms company from suing Winchester. From this came the birth of one of American's leading firearm companies.

Meanwhile, at the beginning of this article, we had mentioned that Horace Smith had gone back to his home in Springfield, after the sale of the Volcanic Arms company to Oliver Winchester, and 8 months later, Daniel Wesson had left the company as well. Neither of them had been idle after they left the Volcanic Arms company. While Samuel Colt had a patent on revolvers, his revolver patent was due to expire in 1856. Anticipating this, Daniel Wesson began working on a new revolver design. At that time, most revolvers were percussion cap fired and the user would have to pour black powder into each of the six chambers of the cylinder, then push a bullet into each chamber, and then load the percussion caps on the rear of the cylinder, making the whole reloading process cumbersome. Daniel Wesson began working on a design that would use metallic cartridges to load the revolver, thereby speeding up the whole loading process. To do this, he needed to develop a revolver design where the cylinder was bored through and could be loaded from the breech. While he was doing this research, he realized that this concept had already been developed by a former Colt employee named Rollin White, who held the patent for the design. Immediately, Daniel Wesson went to Springfield, Massachusetts and contacted his old friend, Horace Smith. Together, they formed a new Smith & Wesson company to manufacture revolvers and approached Rollin Smith for his patent. Rather than make him a partner in their new company, they offered him a royalty of $0.25 for every revolver manufactured by them. This meant that they were free to manufacture revolvers, while the job of defending the patent from other infringers was White's responsibility. Due to this arrangement, Rollin White lost a lot of money battling court cases, while Smith & Wesson prospered. 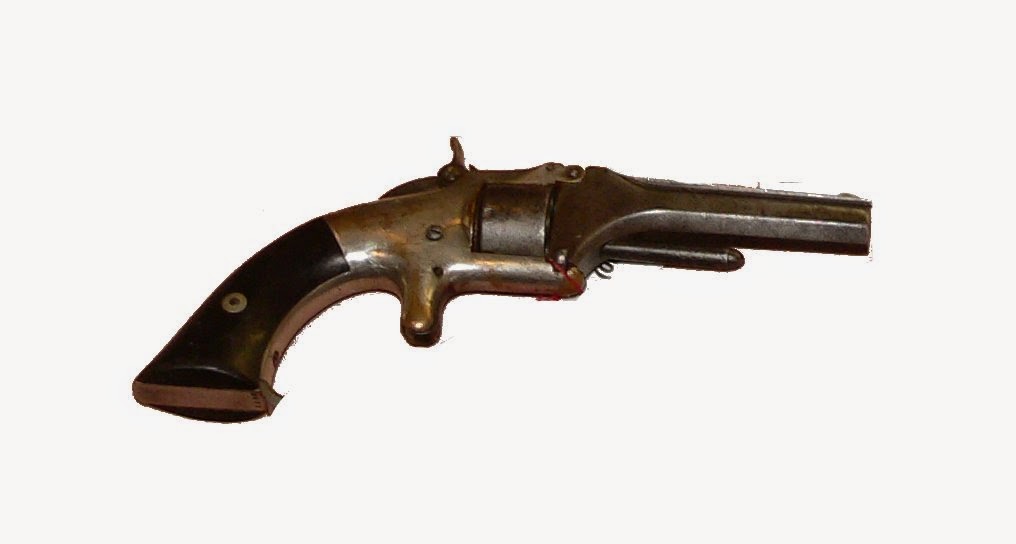 After the end of the Civil War, Smith & Wesson started manufacturing revolvers suitable for the American west and also started selling to the US Army, Russia, Australia etc.

So there you have it, from the Walter Hunt rocket ball patent to the birth of two US firearms giants, Winchester and Smith & Wesson.