Many months ago, we studied the differences between the 5.56mm. and the .223 cartridges. In that article, it was mentioned that the dimensions of the 5.56x45mm. NATO cartridge and the .223 Remington cartridge are almost identical. One reader of this blog, Mr. Mark Rohrer, recently commented in that article that he did the math and found out:

So what is going on here? If .223 inches is bigger than 5.56 mm., how are the dimensions of the two cartridges nearly equal? This article explains everything about this mystery. 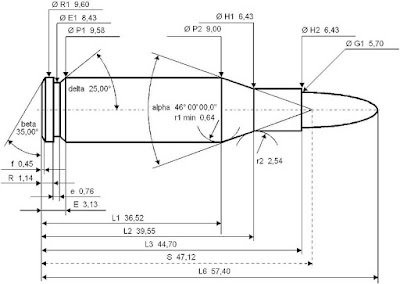 Dimensions of a .223 cartridge per the C.I.P standards. Click on the image to enlarge.
Image licensed under the Creative Commons Attribution 3.0 Unported License by Francis Flinch.

The dimensions of this cartridge are specified in mm., in the above image, so we can easily compare it to the next image, which happens to show the specifications of a 5.56x45mm. cartridge per the C.I.P standards: 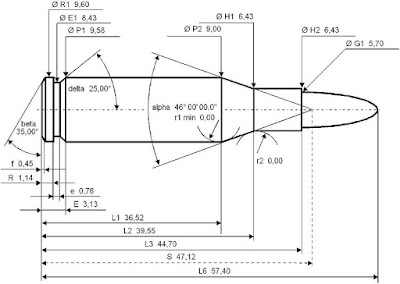 Dimensions of a 5.56x45 mm. cartridge per the C.I.P standards. Click on the image to enlarge.
Image licensed under the Creative Commons Attribution 3.0 Unported License by Francis Flinch.

As you can see, the external dimensions of the two cartridges are almost identical. In particular, note the diameter of the bullet (marked in both images as ⌀G1), which happens to be 5.70 mm., which translates to .224 inches (actually, both images show it as "5,70", but in some European countries, they use the comma where we use the decimal point and vice versa, so they write "5,70" where we write "5.70". Also, in engineering drawings, the convention is to use the diameter symbol (i.e.) ⌀, to denote the diameter of the object at that location.)

From the above images, the reader can see that not only are the bullet diameters identical, so are the external dimensions of most other parts of the two cartridges as well. The differences between the two really have to do with the internal dimensions, case thickness and pressures generated, as this article that we studied previously explains.