First, the name is somewhat misleading because skin cartridges were not really made of skin. They were actually made of animal gut, mostly cattle, sheep and pig intestines. The intestines were first soaked in a weak solution of potassium hydroxide (i.e. lye solution), which would remove the fat and inner mucous membrane from the gut and prevent further putrefaction. The intestines were then beaten thin and stretched over formers made of wood or metal to dry out. After drying out, the intestines would form seamless cases that could be filled with black powder. The cases were formed as conical shapes, so that they could be easily dropped into the chambers of a revolver or a rifle for faster loading. The cases were then treated with combustible chemicals such as potassium nitrate, so that they would burn during ignition and leave very little residue behind in the chamber. After filling the cases and adding the bullets, the cartridges were then treated with a little shellac varnish to make them water resistant.

Skin cartridges were used mainly in Colt revolvers and also in the Sharps rifle. They were famously used by Colonel Berdan's sharpshooters during the Civil war. 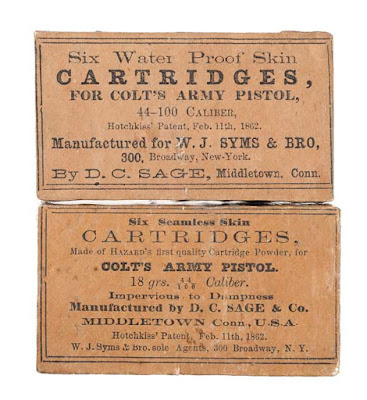 Skin cartridges made by D.C. Sage. Click on the image to enlarge.

Two inventors, William Mont Storm and Julius Hotchkiss developed separate patents to improve skin cartridges. An example of cartridges made using Hotchkiss' patent is shown above. The Mont Storm patent shows an improved way to make cases, as well as using gutta-percha dissolved in rectified naphtha or chloroform, instead of shellac to provide the waterproof varnish. The Hotchkiss patent uses a different technique to improve the toughness of the animal gut so that it doesn't split easily and it also dispenses with the thread wrapping that was sometimes used by others to strengthen their cases.

Over in England, Captain John Montagu Hayes of the Royal Navy received British patent # 2059 of 1856, for a skin cartridge. The patent specification reads in part, "A skin or membrane (prepared from the gut of animals, as pigs, or birds, or reptiles) is used instead of paper for cartridges, which are made without a seam. A covering or network of thread may be used to strengthen the cartridge." (this thread wrapping is what was improved by the Hotchkiss patent in the previous paragraph) 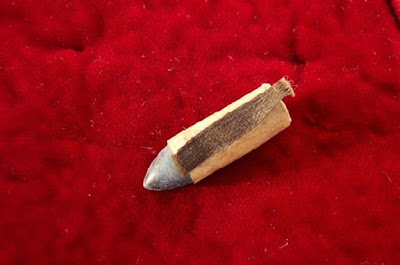 A skin cartridge of British manufacture, made by Eley Brothers. Click on the image to enlarge.

The above images shows a skin cartridge made by the British cartridge manufacturer, Eley Brothers, who we learned about in our last post. Like the tinfoil cartridges we studied previously, this cartridge partly uses the Colt-Eley patent: it has an outer wrapper made of paper, with a tape to quickly pull the cartridge out of its outer paper wrapper. The paper wrapper is clearly visible in the image and the skin casing is inside it. 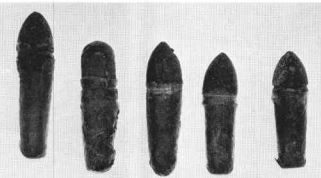 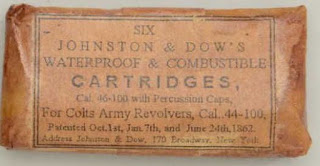 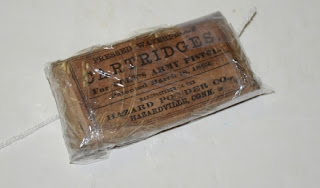 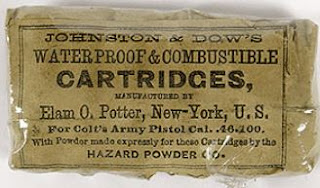 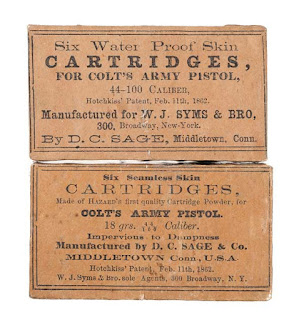 Skin cartridges made by different American manufacturers. Click on the images to enlarge.

Like the other combustible types of cartridges, skin cartridges rapidly fell out of fashion when the first metallic cartridges were invented.