A long time ago, we studied lever actions and one of the most famous lever action weapons was the Winchester Model 1873 rifle.

Winchester Model 1873. Click on the image to enlarge. Image courtesy of http://www.adamsguns.com/

This rifle was extremely popular with settlers and cowboys in America and became known as "the gun that won the west". It was manufactured for 46 years between 1873 and 1919 and during this time, 720,610 rifles were made. Bear in mind that the entire population of the United States was around 70 million people at that time, so this means it was an extremely popular rifle.

The reader should note that this was not a long-range rifle at all. The cartridges it used weren't very powerful and accuracy was not the best -- your average Model 1873 rifle couldn't put 5 shots into a dinner-plate sized target at 100 yards. So what was good about this rifle that made it so popular then? Well, it was a rugged design, and it used the same cartridges as revolvers, so that the user only needed to carry one type of cartridge for both weapons. Also, many users didn't need pin-point accuracy and the rifle was powerful and accurate enough to be used to hunt deer or for self-defense. The lack of accuracy and power was more than made up for by its ability to shoot rapidly and the large capacity of its magazine. It was also relatively cheap. 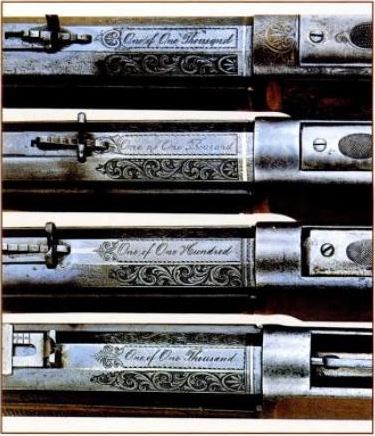 Winchester catalogs from that period were quoted as follows:
"The barrel of every sporting rifle we make will be proved and shot at a target, and the target will be numbered to correspond with the barrel and be attached to it. All of these barrels that are found to make targets of extra merit will be made up into guns with set-triggers and extra finish and marked as a designating name, "One of One Thousand," and sold at $100.00. The next grade of barrels, not so fine, will be marked "One of One Hundred" and set up to order in any style at $20.00 advance over the list price of the corresponding style of gun."

The price of an ordinary Winchester Model 1873 rifle around 1880 was around $20. The "One of One Thousand" rifles were sold at a list price of $100 each and the "One of One Hundred" models were sold for around $40 each. Considering that the price of one acre of best quality farmland in Kansas was $11, these higher quality firearms were quite expensive and only rich people could afford to buy them.

While the fine walnut stock with checkering, case hardened parts and set triggers were standard with these higher-end rifles, the factory also offered custom upgrades for extra. For instance, a person could add special upgraded walnut stocks, long range sights, silver or gold finish, custom engravings and monograms etc. Since many of the owners of these higher-quality rifles were quite rich, these rifles were often upgraded with these extra options. 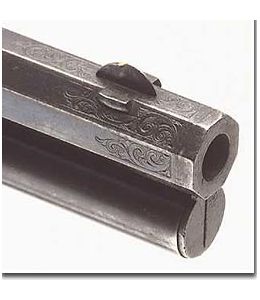 Winchester only manufactured 132 rifles of "One of One Thousand" quality (some sources say 133 or even 136 rifles.) The "One of One Hundred" rifles are even rarer, only 8 were ever produced, as per the Winchester factory records.

When the "One of One Thousand" rifles hit the market, they were priced at $100 each. Today, one of such rifles could easily sell for over $100,000 or more. The "One of One Hundred" models are even more expensive, since only 8 were ever made, therefore the selling price of one of these is much more. By contrast, an ordinary Winchester M1873 from that period sold for around $20 then and would sell for around $3,000 - $4,000 today.