In the last post, we studied a popular mechanism called the bolt-action. Now we will study another mechanism that is also still being used today, the lever-action.

A lever-action weapon uses a lever that is located near the trigger, to load new cartridges into the weapon. Often, the lever is formed in such a shape that it also does double duty as a trigger guard as well.

In the picture above, we see a Winchester model 1873. This was one of the most popular lever-action guns and was known as "The Gun that won the west", though the Colt Peacemaker may also have a claim to that title. Notice the large loop next to the trigger guard. The user can put his hand in the loop and rotate the lever around the trigger. This cocks the hammer and opens the chamber to unload the previous cartridge. Spring pressure moves a new cartridge from the magazine into a position where it is ready to be loaded. The user then pulls the lever back to its initial position and this closes the chamber and the weapon is ready to fire.

The best way to illustrate how the mechanism works is to show one in use. Note how the gentleman in the video loads and fires this weapon.

The first weapon to use this type of action was the Spencer Repeating Rifle in 1860. Unlike the later Winchester 1873, using the lever on a Spencer rifle only removed the old cartridge and fed in the new one. The user still had to cock the hammer as a separate action. The weapon used rimfire cartridges and could hold 7 of them at a time in a tubular magazine. It was shown to Abraham Lincoln and he was impressed enough to order that it be adopted by the United States army and navy. A normal user could fire approximately 20 cartridges every minute using a Spencer rifle. Unusually, the Spencer rifle had the magazine tube in the butt of the weapon.

The first rifle that also cocked the weapon upon operating the lever action was by one Oliver Henry, an employee of Winchester. This rifle was called the Henry rifle in his honor. Unlike the Spencer rifle, this one had the magazine located under the barrel, which is where most lever actions have it located today. During the American civil war, while the rifle was never issued officially to the Union army, many soldiers saved their pay so that they could purchase one with their personal funds. The Henry rifle could hold up to 16 cartridges in its magazine and fire at the rate of 28 cartridges per minute. In fact, the confederate forces, who were still armed with muzzle-loaders often derided the weapon as "the damned yankee rifle that they load on Sunday and shoot all week!" 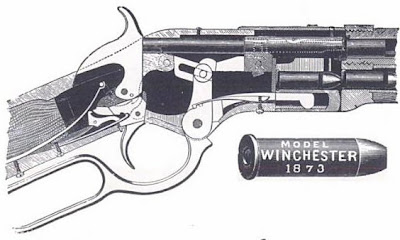 In the above image of a Winchester model 1873 rifle, you can clearly see that the cartridges are stored in a magazine under the barrel, as was the case in the Henry rifle as well. Contrast this with the earlier Spencer rifle that stored extra cartridges in the butt of the rifle stock. The lever action mechanism can also be clearly seen. As with the Henry rifle, manipulating the lever ejects the old cartridge, loads a new one and also cocks the weapon simultaneously.

A significant competitor of Winchester was Marlin. The Marlin model 1894 which was first built in 1894 is still being manufactured today. In fact, if you look at the video above, you'll notice the gentleman is firing a Marlin 1894 as well.

Lever action rifles have a few good things going for them: They lack "handness", i.e. they can be fired equally well by a right-handed or a left-handed shooter, as the lever is accessible from either side. They also offer a higher rate of fire than a bolt-action weapon, since all that is required to fire is to pull and push the lever back. They are also shorter than bolt-action rifles, which makes them easier to manipulate by people riding on horseback. This is why Winchester lever-action rifles were so popular with frontiersmen in the Wild West. During the American civil war, many groups of scouts, raiding parties and skirmishers used Henry lever-action rifles for the same reason.

On the other hand, they also have some disadvantages. Since most of them use tubular magazines which are inside the stock, the balance of the weapon is altered. Pointed spitzer type bullets can occasionally detonate inside a tubular magazine, as the sharp pointed tip of each bullet rests on the primer cap of the next cartridge. It is also harder to operate the lever when one is lying prone on the ground. This is why they didn't catch on much with military forces around the world. Most lever action weapons also don't have detachable magazines, hence it is not possible for a user to pre-load a bunch of magazines ahead of time.

Lever actions are also not as strong as bolt-action weapons, so they cannot be used for longer-range rifles. This is why the cartridges used by lever-action rifles are not as powerful as those used by bolt-action weapons. Since hunting usually needs shorter range weapons and also since the weapons are shorter overall and have higher firing rate, this type of action is popular with hunters and they are still used by them to this day.
Posted by The Editor at 1:23 AM