In our last two posts, we studied the pump-action and the lever-action, both of which are used in repeating weapons (i.e.) they allow the user to fire multiple shots one after another without reloading the weapon. In this post, we will study an action from the 19th century that is normally used in single-shot weapons. We're talking about the falling block action.
We've already seen an action where the back of the breech is closed by a pretty solid block. We're talking about the Ferguson rifle which we looked at around a couple of months ago. In a Ferguson rifle, the seal is provided by a screw plug. A falling block action uses a similar idea, except that instead of using a screw plug, it uses a solid block of metal that slides vertically on two grooves.

Click on image to enlarge
The above picture shows a rifle with a falling block action. The lever to activate this action also doubles as a trigger guard, similar to many lever actions. Now we will take a look at the action itself. 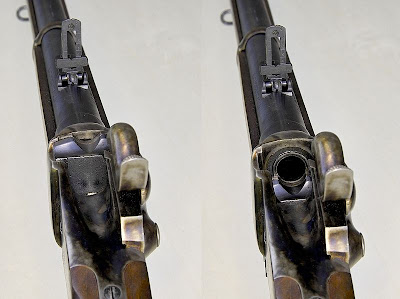 The above figure shows a Sharps rifle, one of the earliest weapons using a falling block action. The picture on the left shows the action with the breech closed by the raised block. The picture on the right shows the breech open. Notice that the block has slid straight down and you can only see the top of the breech block in the picture on the right.
When the breech block is open, the user can pull out the old cartridge and insert a new one into the chamber. Then the user manipulates the lever to close the breech. When the breech is closed, the solid breech block forms a very tight and rigid seal indeed. This is such a strong action that is it not only used in small-arms, but also in heavy artillery pieces as well.
One of the early rifles that used this type of actions was the Sharps military rifle that was used by a unit in the American civil war called the Berdan's Sharpshooters. They were led by Hiram Berdan, who we've already heard of before: He's the same gentleman who later invented the Berdan type of primer for centerfire metallic cartridges, which is still used to this present day. The Sharps military rifle was much more efficient than the old muzzle-loaders and was reknown for its accuracy and speed of fire. It became very popular as a sniper weapon during the US civil war, due to its shooting qualities. The Sharps company also released a smaller carbine version which became very popular among both the Union and Confederate armies and was also later used in wars with the Native American tribes. The Sharps rifles of the civil war era used percussion cap technology, but by 1874, they began to use centerfire cartridges. The Sharps Borchardt model 1878 rifle was a strong and accurate buffalo hunting weapon with arguably the strongest action known until the latter half of the 20th century.

Original author Arthurh. Used by permission from wikipedia.com under the GNU Free Documentation License.
The above picture shows a Ruger No. 1 rifle that uses a falling block action. The picture shows the rifle with the action open. This action is so strong that the designer, Lenard Brownell once said, "There was never any question about the strength of the action. I remember, in testing it, how much trouble I had trying to tear it up. In fact, I never did manage to blow one apart."
Falling block rifles were famous for their accuracy and strength of actions and they were used by several military forces in the end of the 19th century. It was the invention of the Mauser 1898 bolt-action rifle that made it lose popularity in the 20th century, because the bolt-action could be loaded by a magazine and could therefore shoot a bit faster. There are still some falling block action weapons such as the Ruger above, that are manufactured as hunting weapons.
Posted by The Editor at 12:01 AM