When we last left off on our study of firearm mechanisms, we were still dealing with muzzle-loaders and the percussion cap. While we did study some details about breech-loaders, we really didn't study any of the mechanisms associated with them, aside from the Ferguson rifle. The rise of breechloaders started with the rise of metallic cartridges. In this post, we will study a common breech loader mechanism called the break-action. This is also called top-break or break-barrel action Actually, we did study a bit about break-actions in our discussion about revolver loading mechanisms earlier.
In a break action weapon, the barrels are hinged and break open on top to expose the chamber. One of the well-known examples is a Lefaucheux gun from 1836, which used pinfire cartridges.

There is a lump under the barrels through which a pin passes and the barrels pivot on this pin. There is also a slot cut into the other side of the lump. When the barrels are closed back in place, the user turns the lever in front of the trigger guard, which pushes a projection into the slot, thereby keeping the barrels from moving upwards.
When the barrels are tilted upwards, the user can remove the old cartridges, insert the new cartridges into the barrels and then close and lock the mechanism.
Of course, this mechanism was not always the strongest, but people began to improve upon this basic idea. 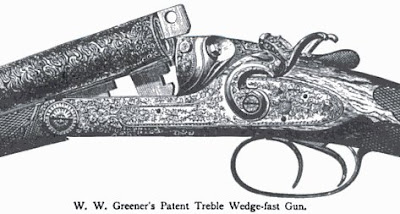 In the picture above, we have a W.W. Greener gun using his Treble Wedge-fast mechanism invented in 1865. This gun has three ways to hold the barrel in place. Under the barrels, notice the two projections with slots cut through them. A holding bolt through each one of these slots holds the barrels and prevents them from pivoting, when locked. In addition, notice the top of the barrel also has a projection with a hole through it. When the barrel is locked into place, a cross bolt is pushed through this hole to hold it in place. Each of these holding bolts by itself is capable of holding down the barrels, but the combination of all three together makes the action a strong one indeed.

In the picture above, we have a Greener Improved Treble Wedge-fast mechanism from the top view. When the user pushes the barrels back in place, they can use the long lever and lock all the bolts before firing the weapon.
Of course, it was soon realized that the movement of opening the barrels could also be used to cock the weapon at the same time and this was taken advantage of. Anson and Deeley made the first successful mechanism of this type in 1875, which was followed by other manufacturers such as Westley Richards, Greener, Purdey etc. 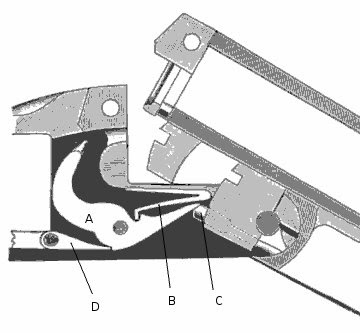 The mechanism above is an example of a Greener "Facile Princeps" mechanism. When the barrels are opened, the small lump C pushes one end of hammer A. Since the hammer turns about a pivot, opening the barrel turns the hammer A further back. As the hammer is pushed back, it also compresses the v-shaped spring B. The barrel is opened until the hammer cocks. This happens when A rotates sufficiently for the tip of lever D to hold A as shown in the image above. The weapon can now be loaded with cartridges and closed.
When the trigger is pulled, lever D is pivoted and thereby releases the hammer A. The spring pressure from the v-shaped spring B makes it open and thereby rotates A, which makes the beak of A sharply strike the center of the cartridge and fire it.
It was also realized that the action of the falling barrels could also be used to eject the old cartridges automatically as well. The first example employing this idea was the Needham gun of 1874, but variants of the basic principle were made by several others including Perkes, Anson and Deeley, Baker, Trulock, Ross, Holland & Holland etc. 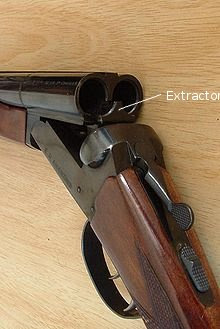 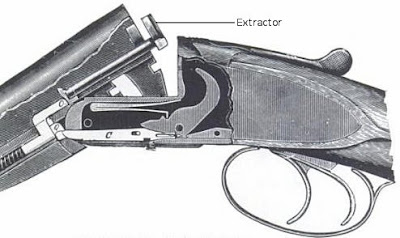