The side-motion action is one of the more unusual actions in the history of gun-making. It was considered a pretty strong action and second only to the break-open action of the Lefaucheux gun. 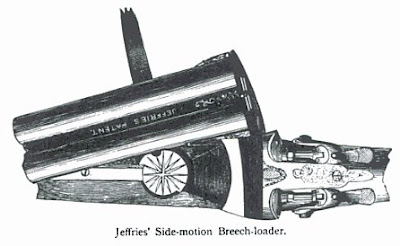 The above image shows a Jeffries Side-motion breech loading shotgun from 1862. In his design, the barrels are mounted on the edge of a circular disc. A long lever under the trigger turns the circular disc. Since the barrels are mounted on the edge of the disc, they move eccentrically to the side. Mr. Jeffries manufactured weapons of this type in his factory for years, before finally abandoning this design. A manufacturer named Fox also made guns of this type, but did not achieve much success in America. The break-open mechanism was considered superior by most sportsmen worldwide and hence this mechanism was abandoned.
The same idea was also employed by a Prussian gunsmith named Dreyse, who we've already heard about when studying the Dreyse Needle Gun, which was the first bolt-action weapon as well. Dreyse used the side-motion action for a hammerless gun: 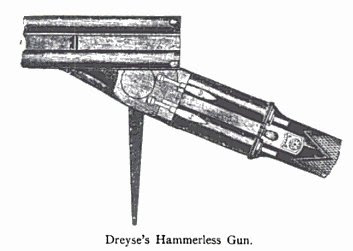 In the Dreyse Hammerless gun, operating the lever not only moved the barrels in an eccentric circle, but also cocked the weapon in the same movement.
Posted by The Editor at 4:13 PM