Of the different types of materials used to make gun stocks, the most common one used over the ages was wood. Since gun-making was always considered an art-form, it is no surprise to note that the work of making gun-stocks was usually entrusted to master woodworkers. These master woodworkers would generally use high-quality hard woods to make the stocks. The material most used was from walnut trees.
The requirements for a wooden stock generally are:
As it happens, walnut wood happens to fit these requirements the best.
The most high-quality walnut wood is obtained from the Juglans Regia, the Persian Walnut (or Common Walnut) tree. This tree is also known as the "English" walnut, because British sailors spread this tree around the world. This name is common in North America, because there is already a native American walnut tree of a different subspecies (Juglans Nigra) and so they call the Juglans Regia as an "English walnut" to distinguish between the two. The tree actually grows from Xinjiang province in China, all the way into Western Europe. It is commonly found in Northern India. This species has great genetic variability and the trees found in Western Europe tend to have larger size, but only one fruiting period, whereas trees in the Eastern range are smaller, but produce fruit for multiple years. English colonists and sailors also took this tree to the United States, Canada, Australia, New Zealand, South Africa etc., where it still grows. It was also introduced to Mexico, Chile and Argentina, perhaps by Spaniards.
The wood from this tree is often used in high-quality furniture and firearm stocks. The finely-figured walnut woods are called "English" walnut in the gun trade. Ironically, W.W. Greener mentions in his book, The Gun and its Development, (printed in the early 1900s) that a majority of so-called "English" walnut is not English at all. The walnut trees growing in England at that time were admirably suited for gun-stocks, but many lacked the rich brown color and figured patterns for customized high-end weapons and the second problem was that true English-grown walnut wood was not available in large quantities anyway. Therefore, many manufacturers actually got their wood from the European continent. He goes on to mention that English walnut wood is heavy, well marked, but not gaudy and says that French walnut is lighter than English walnut, has richer color with black streaks and open grain. He says Swiss and German walnut woods tend to be grey and pulpy, but if well chosen and naturally matured, they are equal to the finest French woods. He says that Belgian walnut is not available for sale in adequate quantities and Eastern European walnut wood is of very high quality and available in quantity, but is often not prepared or sawed correctly for the purposes of a gun-maker.
These days, France, Serbia, Romania, Greece, Bulgaria, Turkey, California and Chile are major producers of English walnut woods, while Australia and New Zealand are also beginning to up their exports of this wood as well. 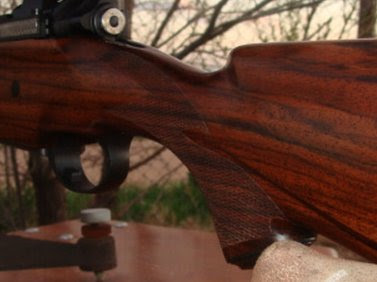 Gun stock made of fine English walnut wood (J. Regia)
In the United States, the American walnut (J. Nigra, also called the "Black Walnut") that we mentioned earlier, is often used due to widespread local availability, particularly in the East coast. This wood has dark color and good density. Like the "English" walnut, it is also heavy and strong, but easily worked. It is extremely valuable and forest rangers are often called in to stop walnut tree poachers. In 2004, there was a poaching case involving one 16 meter long tree, which was worth $2500. 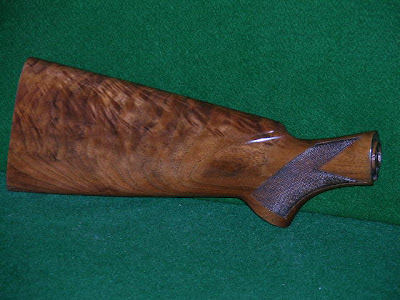 Gun stock made with American walnut (J. Nigra)
Another tree that was often used in North America for a few hundred years was the Curly Maple tree, again due to widespread availability, beautiful pattern and heavy density. Most of the famed Kentucky rifles used curly maple wood stocks. It has a characteristic flame or tiger striping pattern that makes it look very beautiful. 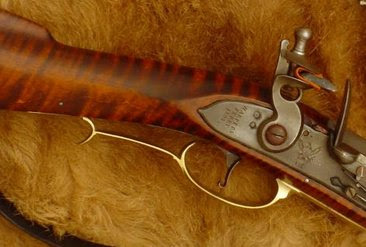 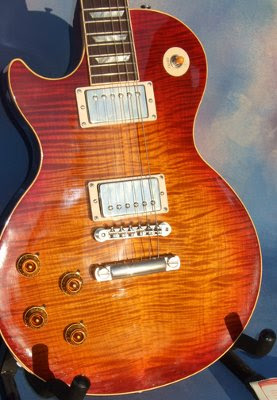 Beech wood, Birch, Ash, Myrtle and occasionally Mahogany wood are also used for making some gun stocks. Beech wood is heavy, but does not have any pattern in the grain, like the woods seen above.
The grain of the wood contributes greatly to the strength of the wooden stock. It should ideally flow towards the toe of the stock for greater strength. The wood should also be prepared suitably -- it should be slowly and completely dried before working on it, otherwise it could split or lose color later. A high-end stock-maker will typically use wood that has been slowly air-dried for several years (7-8 years is common, but some are even as old as 20 years!), before attempting to machine it. Cheaper wood stocks are often kiln-dried and therefore more prone to splitting and losing color much more quickly. Air drying is what gives the wood the deep dark brown color. The best wood comes from the portion of the tree where the trunk and the roots join.
Here's a video demonstrating some of the things that stock makers look for, when selecting wood blanks to make a stock.

Wood stocks are the most beautiful to look at and have been used through much of firearms history, but they have a tendency to warp under adverse weather conditions. Due to this failing, modern military, hunting and sniper rifles usually use fiberglass stocks instead.
Posted by The Editor at 8:45 PM