A stock is a part of the firearm to which the barrel and firing mechanism are attached. From the very first firearms, they have always been attached to some sort of stock, as the picture below shows: 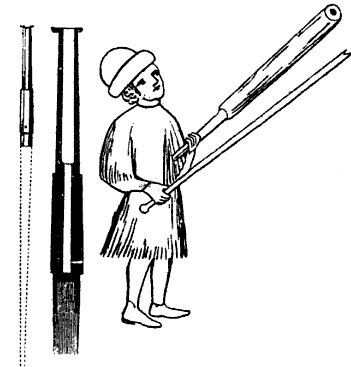 In the illustration taken from an ancient manuscript, the reader can see that a firearm is attached to the end of a stick. A second stick is used as a support as well as a ramrod for the firearm. In most early weapons, the stick was made of wood. In fact, the word "stock" comes from the German word stoc which means "tree trunk."
In the very first firearms, there was generally a hollow socket in one end of the firearm, through which, the wooden stick was pushed into and secured. This is similar to the design of many spears of that era. The next development was the bombarde by the French and Italians. This was a small hand-cannon attached to a wooden stick. The stick was curved on the bottom side so that it could be placed on the shoulder and aimed with both hands, as shown in the first illustration below:

In the earliest firearms, people would manually light their firearms with a slow match. It was soon realized that a user could support their firearm better if they held it with two hands and lit the firearms with a separate trigger mechanism. This was the design adopted by early matchlock weapons such as the arquebus.

Soldier with an arquebus
Using both hands to aim the weapon, the user could then brace the weapon against his shoulder for strong support. In the above picture, note the shape of the stock of the arquebus and notice that the shape looks pretty similar to modern rifles as well. The arquebus stock design was so influential that the shape and design has stayed with us, almost unchanged, since the 1500s!
Posted by The Editor at 10:59 PM