In our last posts, we studied the lever action and the bolt action. In this post, we will study another action that works on similar principles, called the pump action or the slide action. Most people have probably seen pump-action weapons used in several movies, such as Terminator II. They are very popular in repeating shotguns, but there have been some pump action rifles as well.

The above picture shows a Winchester 1912 model pump-action shotgun. Like a lever-action rifle, this weapon too has a tubular magazine that stores cartridges under the barrel. However, the weapon is operated similar to a bolt action, except that the cocking lever is under the barrel. Notice the brown handgrip under the barrel. That grip can slide back and forth horizontally and is called the fore-stock or fore-end 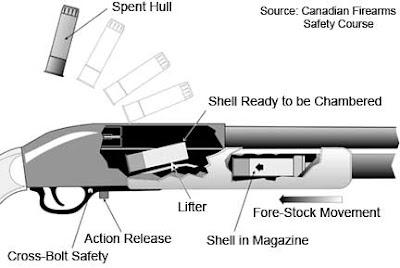 The user initially loads the magazine with cartridges, usually from a port in the side, as is the case with a lever action weapon. Then when the user pulls the fore-end lever back, it unlocks the bolt and moves it backwards, ejecting the old cartridge. As part of the same motion, it also cocks the weapon and a new cartridge from the tubular magazine is pushed onto the lifter spring (also called the elevator spring), which lifts the cartridge from the level of the magazine to the level of the barrel. On the forward movement of the fore-end, it picks up the new cartridge and slides it into the chamber. The final part of the movement of the fore-end locks the bolt in place and ready to fire.
As always, let us watch a video of one of these in action.
Notice how the users pump back the weapon after every shot to reload the next cartridge. Also note how the cartridges are loaded into the tubular magazine before starting to shoot.
From the video, we may note several advantages and disadvantages of this type of action. Unlike the bolt-action and lever-action, it is not necessary to take your finger off the trigger, as the loading action is performed by the other hand. This means it is faster to reload than a typical lever-action or bolt-action weapon. It is also possible to keep the weapon pointed on target while performing the pumping action. Since the action is manual, it can be used with low-power cartridges as well. This allows the user to mix and match different types of cartridges as the situation demands. The user can also reload the magazine at any time and keep shooting. Like the lever-action, a pump-action also lacks "handness" i.e. it can be fired equally well by right-handed or left-handed users, as the pump action is easily accessible by either hand. In fact, in the video above, note that the first shooter fires the shotgun right handed and the second user fires the same weapon left-handed.
The disadvantages of the weapon are also fairly obvious. Like most lever-actions, there is often no separate detachable magazine. Hence, the user cannot pre-load a bunch of magazines with cartridges in advance. Some newer weapons feature detachable magazines, but it is not common. Also, as you may have noted in the video above, at least two shooters did not realize that they'd fired all their bullets, as there is no visible way to tell how full or empty the magazine is.
These days, most pump-action weapons are usually shotguns. These weapons have found favor with hunters as well as many police and military forces around the world.
Posted by The Editor at 10:47 PM